Mary grew up in a small town in Ireland, her mum and dad where doctors and  her gran died when she was about 10 years old… When Mary was 17 she went to a finishing school in Paris while deciding if she wanted to become a nun…   In that finishing school  she was the only non-French speaking student there.

Mary Robinson famously put a light in her kitchen window to guide the people that have left Ireland to live a country abroad back home.

If you had a chance of asking Mary Robinson a question in front of 600 people, would you do it? I would, and I did. Here’s what I said and what Mary replied: 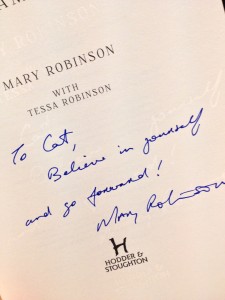 Afterwards Mary signed a copy of her book for me