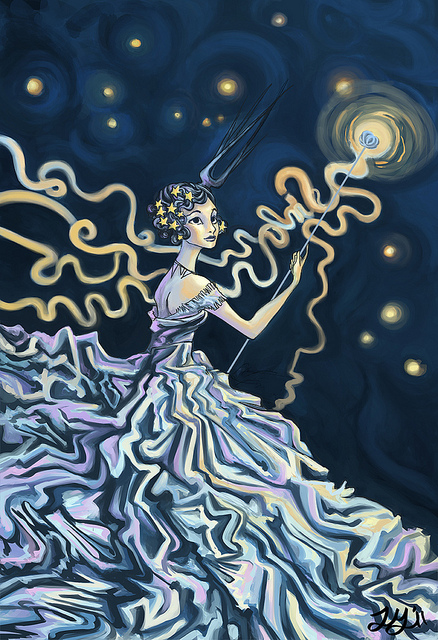 When I first saw the silver sparkling necklace in the jewellers shop window, I thought it was just an ordinary diamond necklace. However, the twinkling diamond at the centre of the polished masterpiece held an emotional attraction for me, as it reminded me of a similar diamond on my grandmother’s ring, so I went in to inquire its price.

“Five an ‘alf million dollars,” replied the shopkeeper. I was shocked.

“That much for a silver necklace with a diamond no larger than a pinhead?” I was about to walk out.

“Nope,” grinned the shopkeeper. “That there’s no ord’n’ry diamond. That’s a star, that is. A mighty fine spec’min, from the ac39 system. An’ I should know, ‘coz I fetched it out of the sky wiv tweezers, an’ if you don’t b’lieve me, here’s the tweezers.” I looked down at the grinning man, and then at the implement he held in his hand. It was exceedingly blackened, but still recognizable as a pair of tweezers. He gestured with them.

I gasped. A mighty looking Mega-Spacetravla stood on the lawn. (or what remained of the lawn.) I was gobsmacked.

I recklessly bought the necklace and strutted home. After all, not every supermodel has a necklace with a real star in it! I wore it with pride and positively enjoyed it when people stopped me in the street to comment on my necklace. I skipped to the studio every day, skipped back in the evening. And imagine my ecstasy when I received a call from the lab saying that the merchant was right; the “diamond” was indeed made entirely of starjuice, and what is more, the outer casing was made of the most coveted metal: supersteel.

I was overjoyed. I wore it with pride, sticking my chest out every time someone walked by, in order to let the, know that I had possession of the famous Star-Necklace , and I wasn’t going to take any nonsense from anyone. I boasted to all my friends that my necklace, my PRECIOUS was most powerful, and I could use it to manipulate even the most powerful enemy.

But then, one day at the photo studio, I began to notice a weight on my chest that hadn’t been there before. It was the star. By lunch, I was finding it hard to breathe, and was sweating. My manager yelled at me for looking too simpering, or too weak for any of the planned shoots. Eventually, he discharged me early, growling something about a doctor and my brain.

I walked outside, glad of the fresh air, and to be rid of the pressing atmosphere inside. I was shuffling along the sidewalk on my way to the taxi station, when there was an explosion loud enough to shake the entire surface of the tiny planet Bin-Googol, on which we were staying. I looked up and reeled in shock as, before my very eyes the whole atmosphere was lit up in a fantastical array of pinks, purples, oranges and reds, (aside from it’s usual colour, a violent shade of green). Then came a whooshing sound, filling the whole air around me. I stared around, curiously calm. All around me, people were running around and screaming. A few streets away were some flats on fire. In the distance, a siren blared, but I scarcely noticed it.

A column of ants were solemnly marching single file, carrying over their heads their horrible hairy queen and innumerable eggs. Then, it struck me what had made the explosion, the dreadful whooshing sound, and had caused all this chaos . My star. My beautiful, shining star, had imploded, and was now sitting, a black hole, upon my chest. I prayed silently to the gods, Agron, Mephtonipher and Jane, thanking them for having the foresight to encase the star in supersteel. then, half dazed,

I did the only thing I knew how. I tore the necklace from around my neck, breaking the chain, and flung it into outer space, hoping against hope that all the satellites in orbit wouldn’t hold it up, or worse still, hold it in place long enough to suck up the entire planet. Luckily, it broke through, leaving a visible hole which soon closed up. I breathed out, then realized I had been holding my breath. I finally looked down, and gasped with anguish. As the very terror of the situation took a hold on me, I realized that my breasts, my Pride, (the left one,) and Joy, (the right one,) had been sucked away. Gone! Off the face of the planet forever! Dazed, I ran home and called an ambulance.

The next few days (I say days, it could have been weeks or even months,) were a bit hazy; a blur of beds, nurses, bandages and plastic surgeons. When I was finally let out of hospital, I was subdued and walked hunched over, so that no-one might recognize me.

I took my case to court, but it took the judge and jury a while to take me seriously.

“Stars cannot be taken from the galaxy and sold in simple bric-a-brac shops.”

However, once I plucked up the courage to show the female members of the jury (which was mostly women at that time anyway,) my “Removable Boobs”, the court favour began to swing in my direction. Eventually, one year after my accident, the jeweller was put away for a long term sentence in prison. I also managed to claim compensation, but it was a poor substitute for my breasts. However just three weeks later I received a letter confirming my worst fears. My manager had replaced me full time. I had a mental breakdown ending up in another few weeks in the hospital.

When I think back, it seems hard to believe how much damage what had first appeared to be a diamond no bigger than a pinhead has caused. That necklace had cost the jeweller (at first) a pair of tweezers, me, $2 500 00, and, ultimately for both of us, our livelihoods. I am not sure how I am to make a living, now that I am out of a job. I spent almost all my money on the necklace, and the rest on medical treatment.

Note: the necklace was last seen heading for a small round green and blue planet with only one moon, inhabited by a strange race of people called the hew-men

My name is Iona. I am 13 years old. I am home-educated

and have never been to school. I love writing poems, stories,

and play scripts, but I also write my own music.