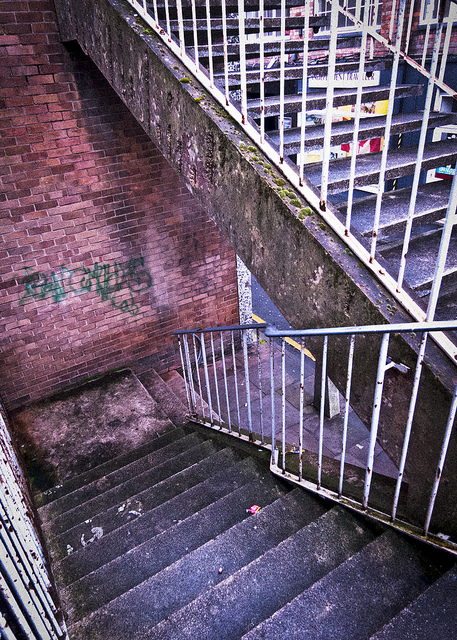 This is a short story in three parts, by 10 year old Alice

My mates are all leaning against the peeling black-painted gate, chatting and laughing, while I stand, nearby, twitching nervously.

“Oi,” Jules waves for me to come over to him. “Now, I have a suggestion. Kieran here,” he pauses, gesturing to me by his head, “is new to our gang. What about we see if he is worthy, eh?”

They all chuckle, nodding, with sly grins. I don’t understand.

Jules raises his eyebrows. Jules’s blonde curls, flapping in the wind, obviously getting in his eyes, always lure girls in.

A stout boy, leans over, and Jules whispers in his ear. He laughs, and tells the other boys. But not me.

“I have a friend up those steps, Flat 33. Go get some skunk for us, okay?” Jules flings a several notes at me, and I bend over to pick up the missed one.

I pause, trying to work out my odds.

I flatten out my fleece, and finger my ear piercing that I never really wanted. “Am not,” I say limply, and head towards the stairs Jules was pointing me towards, shivering in fear. Once I am out of the gang’s sight, I scurry to the top of the stairs, and flatten myself on the nearest wall. I check my surroundings. Grimy white walls, dusty steps, bent rails, squawking of birds, faint clomp of high-heels, and a strong musty smell.

Hearing the gang laughing, saying I will never do it, I straighten my back, and I stomp up another two flights of stairs. Once I get to the second floor, I wince. I just want to cower into a ball, and fly back down the stairs, and go right back home – no, not home, to somewhere safe. But I can’t. Ican’tIcan’tIcan’t! While still hunched, I stare along the balconies either side of me. Squinting terribly, I can make out three doors on my right and one says ‘16’. It must be on the other side. Turning towards the left, I hope for no risks. I am still clutching a crumpled collection of notes. I decide this isn’t a safe call, and stuff them into my fleece pockets, trembling. I reach Flat 33. I freeze. Gathering up every last morsel of courage inside me, I force my hand forward. It shoots forward, hitting a single bash on the door.

All I can hear is grumbling, creaking, and soft footsteps. My heart misses a beat as the door opens.

I nod my head. He ushers me in. His flat smells strongly of that smell of the wood chip in a children’s playground, and a tomato plant. It made me feel slightly light-headed it was so strong. An over-powering smell of cigarettes oozed from the walls, making me feel dizzy and sick. I try not to breathe it in, but I soon run out of breath. It’s horrible.

“So, who told you about this place?” the man said, his voice crackly with age. He had a pipe in his mouth, sticking out diagonally.

“Jules, he said you were a friend to him,” I say, trying to mimic his bold Cockney accent.

“Ah yes, that arrogant Jules. Brash young thing he is,” he said. “So, what do you want?”

He gives me a look, with no real emotions, or indications of what he is thinking. He picks out a small plastic bag, filled with a murky green powdery substance inside. He lifts up his hands, and raises his eyebrows. He obviously doesn’t think I can pay it. Confidently, I stuff the notes into his palm, beaming.
He shuffles through the small heap of crumpled notes. “You’re five quid off.”

My face sinks. “That was all he gave me.”

“Ah, my prices have risen,” he smirks. “I’ll make him pay it when he next comes. That happened last time, made one of his mates get it for him. Lazy lad he is. He has to pay £10 extra you know… and it’s still rising…”

I let him burble for a bit, while I back towards the door, holding the tiny plastic bag in my clammy hand. When I get the chance, I slip, “Thank you!” in his babble, and leave.

I fled down the flights of stairs, but once I was in the eye-view of the gang, I slowed down and coolly strolled. Jules gave everyone a cigarette, who casually slipped it between their fingers, and filled it with a tiny portion of the murky green powder, and inhaled. I tried to copy everyone with holding the cigarette properly, but it kept on slipping. After I filled it with the last of the green powder, I took a long, anticipated breath.

It was…. calming. It was addictive.