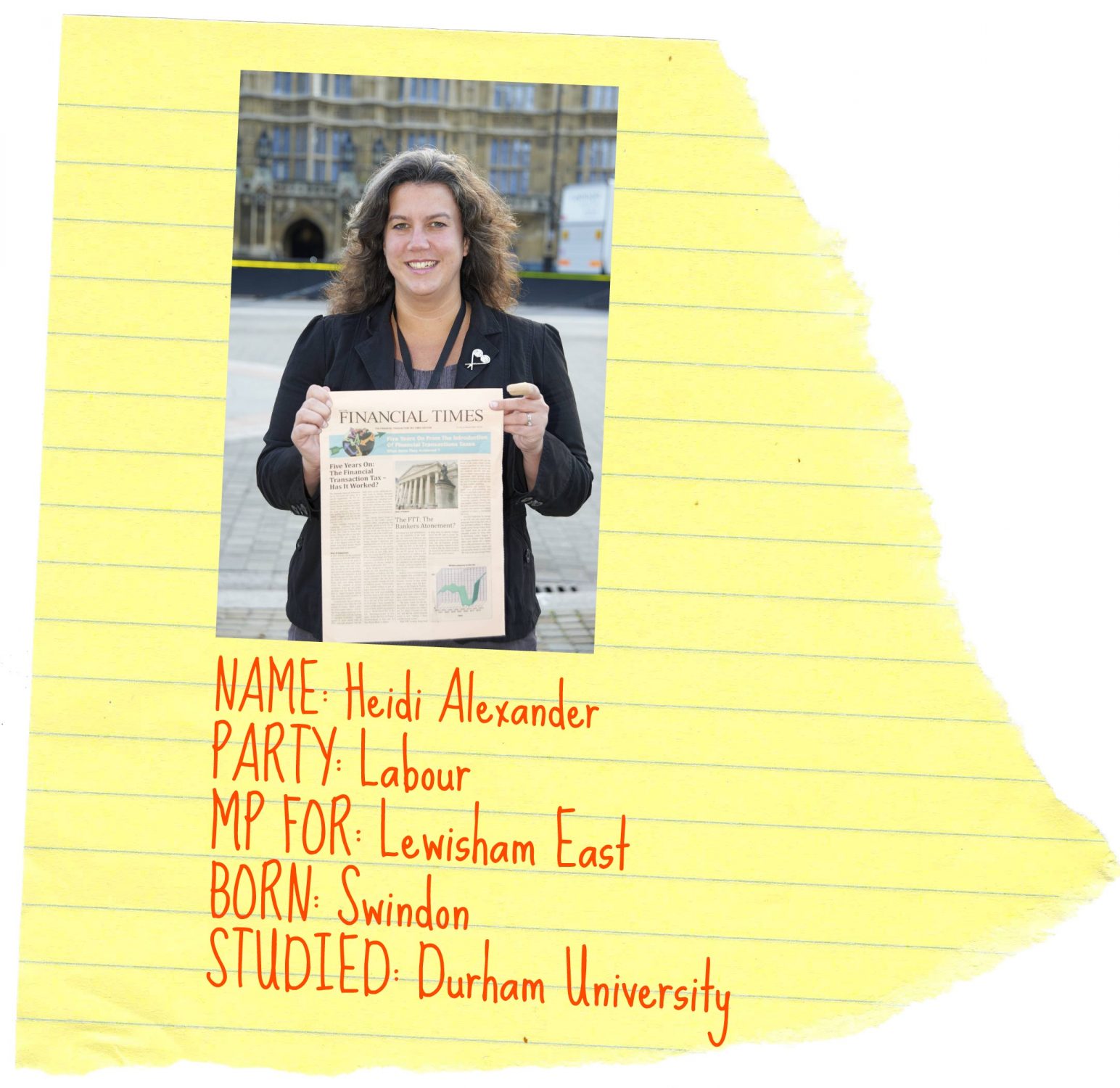 Recently the online parenting website Mumsnet ran a survey which found that people in politics are seen to be ‘white, middle-class and male’.  We think that ANYONE can become an MP, so we decided to chat to some politicians about diversity in politics.

First up, we wanted to know what it is really like for women in politics. We asked Tina to chat with Heidi Alexander, Labour Minister of Parliament for Lewisham-East in London.

When Heidi was growing up, in Swindon in Berkshire, her family was not politically active.  She was interested in various issues, but didn’t really see them as “politics”.

When Heidi went to the University of Durham to study Geography she encountered a lot of people who had very privileged backgrounds and felt a little bit inadequate.  Her confidence grew through discussions outside of classes which made her realise she had firm views on how the country needed to be run.  She came to believe that we need more diversity in politics.

After finishing her Masters Degree, Heidi moved to Deptford in London where she worked as a Researcher for Dame Joan Ruddock, the MP for Lewisham(Deptford).  Heidi was a local councillor for Deptford for six years, eventually holding the position of Deputy Mayor.

The continued mentoring by Dame Joan was very important factor in Heidi’s decision to stand for election when a parliamentary seat became free in 2010.  Heidi felt that she knew the community and the issues, and could represent the constituency well.   To Heidi, parliament didn’t appear to represent the country.

Heidi feels it is important girls be encouraged to get into politics. When she was younger, she looked at parliament and thought that it didn’t really reflect her, and it really should. This was part of the reason she decided to stand for parliament.

Parliament has changed a lot over the last 20 years.  We only see a very small part of the work MPs do on television and in the newspapers.  Heidi’s experience is that whilst sexism does exist, like it does in all jobs, there has been a lot of progress, eg. there is now a nursery (although there are still not enough female toilets!)

Parliament sessions are long, especially on a Monday night when parliament sits through until 10 o’clock, meaning it is difficult for parents of small children, who need to plan childcare around their working hours.

Heidi goes on to say, ” There is ridiculous scrutiny in parliament; what shoes you’ve got on, what jacket you’ve chosen to wear, what your hair looks like”  but she has never had to face such sexism at work.

There is improvement, Heidi notes: “right now we have the Shadow Minister for Women & Equality Gloria De Peiro, Shadow Work & Pensions Secretary Rachel Reeves, Shadow Leader of the House Angela Eagle, and her sister Maria Eagle, who is Shadow Environment Secretary, Emma Reynolds is Shadow Housing Minister and Mary Creagh in Transport; these are all women in really important jobs.

Heidi’s office takes as many work experience placements from local schools as possible, telling us that “if we talk more about what MPs actually do, a lot more people might be interested in politics, and might think about getting involved”.

She believes citizenship education in schools is vital to this, which means giving young people information about how they can pursue a political career or about ways they can get involved in politics without it being your full-time job.

It is important for people to feel that they’ve got somebody who they can talk to, who they can approach and that may represent their interests.

Heidi advises Jump! Mag readers, “If you don’t like what you see in Parliament or in government, then get involved in some way”, adding

Be the change you want to see and you could soon be making a difference.