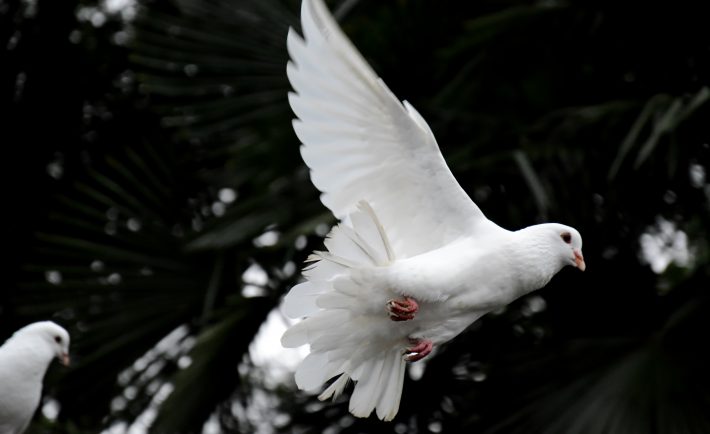 Dad walks over to me. He’s carrying several slices of bread.

‘Hi,’ I say, giving him a look which I hope he understands means, I am so not impressed with this new pre-birthday arrangement.

Dad doesn’t seem to have noticed my look. I wonder what he’s doing with the bread.

‘For the ducks,’ he says when he catches me staring at it.

I nod and decide not to mention that I am no longer five years old and that feeding the ducks in the park doesn’t exactly excite me anymore.

We sit down on the bench next to the willow tree.

‘Fine,’ I say, thinking that he wouldn’t have to ask this stupid question if he saw me every day like he used to; if he still made me toast with honey for breakfast, drove me to school and said goodnight after telling me not to read for too long.

Dad sighs. ‘I’m sorry I’m not seeing you tomorrow, Grace. It really can’t be helped. I—’

‘It’s fine,’ I say, even though it isn’t anywhere close. ‘Mum and I are going to Pizza Express.’

‘You’re not seeing Munira and Amelia?’

Dad hands me a slice of bread. ‘That’s a shame.’

I tear the corner off my piece of stale bread. It’s brown and full of seeds. It must be Roxanne’s bread. I throw a piece into the pond. A female duck swims over and eats it.

Dad tears several pieces from his own slice and throws them in. A few more ducks swim across to our side of the pond, quacking as they come.

‘You know you shouldn’t feed bread to ducks?’ I say.

‘Amelia told me. It’s bad for them, or something.’

‘We could feed the pigeons instead?’ Dad suggests. ‘Like that guy.’

I look over to where Dad’s pointing. On the other side of the pond, a man is feeding pigeons. He’s surrounded by them. I think the guy must be homeless. He’s wearing shabby clothes that look like rags. Some of the pigeons land on his outstretched arms. He’s got a white pigeon on his shoulder. It’s strange how they don’t seem afraid of him.

The Birds is an old film that Dad and I watched together. We used to watch a lot of films together before Dad moved in with Roxanne. In the film flocks of birds start attacking people. It’s actually pretty scary, for an old film.

‘Yeah,’ I say, ‘Like The Birds.’ I smile and then remember I’m supposed to be angry with Dad.

‘You should apologise to Roxanne,’ Dad says. ‘For scaring Kai.’

I shrug and push the toe of my trainer into the dirt. There’s no way I’m apologising. ‘Maybe,’ I say, trying to remain non-committal.

Dad sighs and I can tell I’ve disappointed him. ‘I’m sorry I haven’t got you anything for your birthday,’ he says. ‘I thought I’d ask you what you want first.’

‘I don’t want anything,’ I say, which of course isn’t true. There are lots of things I’d like. I could reel off a long list but I don’t want Dad to think he can just buy me something and then everything will be okay again.

‘I saw these great Converse,’ Dad says. ‘They were purple with a skull and crossbones—’

‘I don’t want anything,’ I say again, cutting him off, even though the Converse actually sound pretty cool.

‘There must be something,’ Dad says. He looks upset.

I feel bad now. I hate being like this with Dad. I remind myself that it’s his fault. He didn’t have to leave us. He told me he was unhappy with Mum. I think he should have tried harder.

I have to be happy, Grace, Dad had said to me. I’ll be a better Dad if I’m a happy Dad.

The bird man has wandered over to our side of the pond. He’s singing a funny song.

A wish for you

And it will come true.

Dad looks at me.

I know it’s never going to happen but I say it anyway. ‘I want you and Mum to get back together.’

I look down at my scuffed trainers. ‘I know,’ I whisper. ‘It’s the only thing I want.’

Dad puts his hand on my shoulder. ‘There must be something else you’d like?’

I think for a moment. ‘I’d like you to stop arguing with Mum,’ I say.

The bird man is very close to us now. He’s got a long beard and small grey eyes. The pigeons flutter at his feet. He continues to throw seeds to them whilst singing his funny song. Dad and I both watch him.

‘Yes,’ I say, and it’s true. The bird man looks like a magician from a storybook. He looks like he knows a thousand secrets. I’ve never seen him in the park before, even though I come here all the time.

‘That bird on his shoulder,’ Dad says. ‘It’s a dove.’ I look again at the white bird.

‘Dove’s are the symbol for peace,’ Dad says thoughtfully.

‘Is that why people have them when they get married?’ I ask.

Dad looks thoughtful. ‘I tell you what, Grace. I’ll make a deal with you. I promise to stop arguing with your Mum. I mean, I’ll really try my best. But I would like you to call Roxanne and apologise for scaring Kai with the worm. It would make things much easier, for all of us.’

I think for a moment. Dove’s are the symbol for peace. It feels like a sign. I look at the bird man. He smiles at me and I notice the crinkly lines around his eyes. He looks as old as time. I guess

Dad leans over and puts his arm around me. ‘That’s my girl,’ he says.

I roll my eyes and try to wriggle away, although it’s kind of nice. I feel relaxed for the first time in weeks. I feel, just for a second, like I’ve got my dad back.

The bird man suddenly lifts his arms and all the birds fly into the air. I shriek and cover my face with my hands. I can’t bear the sound of their wings. The bird man begins to laugh.

Emily Critchley grew up in Essex and now lives in North London. She is the author of Notes on My Family, long-listed for the 2018 Branford Boase award. Emily has a degree in Creative Writing from London Metropolitan University and is currently studying for an MA in Creative Writing at Birkbeck, University of London. When she isn’t writing she enjoys reading, watching films, and bouncing her mini-trampoline.