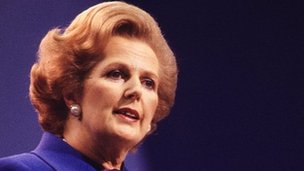 If you have been listening to the radio, or watching the news today, you may have heard that a woman called Margaret Thatcher has died.

You might not have heard of Mrs Thatcher – or Baroness Thatcher to use her correct title – but if you live in Great Britain, your life has been affected by her. Some adults find it amusing or shocking that tweens and teens haven’t heard of her, because she was such a large part of our lives when we were growing up. It is strange for us to realise that she is ‘History’ to you, not current ‘Social Studies!

So, who was Baroness Thatcher, and why is everyone talking about her death?

Margaret Thatcher was born 87 years ago and was the daughter of a grocer. She became Member of Parliament (MP) in North London in 1959. She was education minister before becoming the leader of the Conservative Party.

In 1979 Margaret Thatcher became the UK’s first female Prime Minister, a position she held through two further general elections in 1983 and 1987.

She was a controversial Prime Minister, and even now is still criticised for many of her policies, such as the privatisation of public companies, including British Telecom and British Gas. The year-long miners strike in 1984, in protest against the planned closure of many coal mines, and the later Poll Tax plans made her unpopular with some voters.

[perfectpullquote align=”right” cite=”Prime Minister, David Cameron” link=”” color=”” class=”” size=””] “It was with great sadness that l learned of Lady Thatcher’s death. We’ve lost a great leader, a great prime minister and a great Briton.”[/perfectpullquote] Her policies were at times popular, such as the ‘Right to Buy’ local authority scheme. Some of your grandparents might have benefited from this plan to allow renters to buy their council house at a reduced price. There was also general support for the Falkland War in 1982 when troops were sent to a tiny island off the coast of Argentina to defend British residents

Despite the criticism, she was voted into office three times, so you can see that a majority of Britons thought she was doing a good job.

Her strong will-power gave her the nickname ‘The Iron Lady’, and she was reputed to have only needed four hours sleep a night. In 1990 she was challenged by members of her Conservative Party and was ousted from office. Her tearful departure from Downing Street was an iconic moment of the 90s.

So, Baroness Thatcher was controversial in life, and likely to continue to be controversial in death. She will not have a state funeral, but will be afforded the same status as Princess Diana and the Queen Mother.

For those of us who grew up during her term in office, she was an inspirational figure – as the first woman Prime Minister in Britain. Regardless of our politics, it was a sign of what we girls could achieve, if we worked hard and believed in ourselves.