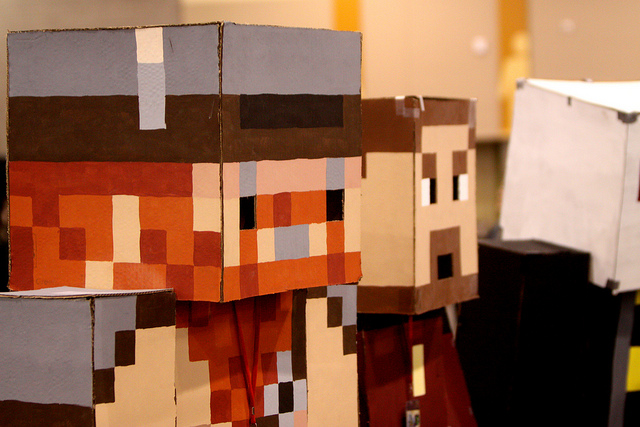 Sitting back, ready for another interesting and rather aggressive night on COD (Call of Duty), I launch my dashboard to see the usual suspects all gathered playing the latest shoot ’em ups.

Except one.  Looking again, I notice my 13-year-old brother Jimbob is playing a game I’ve never seen – MINECRAFT.

After much persuasion and explanation “COME ON BRO, BUY IT PLEASE, YOU BUILD STUFF”,  I decide to purchase it, in order to support him in our mum’s campaign to play online more responsibly.

The game launches and all I see is blocks. Have I got the right game? Where are the graphics?

Wandering mindlessly around, past trees, rivers and spiders, until Harvey Jimbob asks me to come to his house. Here’s the strangest part: he built it.

I continue jumping up and down, wandering hopelessly through the scenery, following a 2D map, then suddenly my brother emerges wielding a pick axe. He looks like a cartoon person and later informs me that he is called ‘Steve’.

I notice how simple the name is, and how little frustration has been spent naming him, simple and no complications.

He leads the way as I follow, clambering over a mountain one hop at a time, and there it is. A building with JIMBOBS in block lettering on the side.

Stunned at the first sight of it, I’m lost for words, “Did you cheat? How did someone of your age build this?”

Wooden walls, cornered off to stop ‘the creepers’ getting in. I am baffled, “What’s a creeper? How do I build?”

It dawns on me, and soon I am so involved – hook line and sinker, I want  more. With very little teaching and half an hour’s ‘training’, I feel like a pro! Together Jimbob and I travel an entire world, one that is just mine and his. We build and we build, knocking blocks out here to put there, searching for the all-too-rare diamonds, which make the pick axes faster, so that you can – you guessed it – mine deeper and build more.

Five hours and a mansion later, I sit back stunned by the glory of what we have ACHIEVED together. I am relaxed. A sense of wellbeing fills me; that we have done what nobody else could possibly have done. The same sense of feeling we used to get in the good old days as a kid, building a den in the living room with duvets and cushions.

That sanctuary we could place our mind to relax.

Why is Minecraft so Cool?

Here’s the thing: it’s not cool – Minecraft is a game not played to be cool like other titles in the market. It does not follow a trend or fashion. It is however, a very fun game to play with a great achievable target:

Express yourself –  it does not need regular daily updates, or new map packs at the kind price of 9.99 a week for a year. It is exactly how my brother described it to me. You build stuff, you express your inner self via the means of art, and you do this without picking up a pen. Your work cant be judged and most amazingly, it’s easy to do.

Why should mum let me play this?

As a 24-year-old family man, I understand the frustrations that come with a lack of stuff to do, ‘go out and play football’, parents shout but youngsters live in the digital era.

With Minecraft, there comes an element of creativity and adventure that is transferable into other projects, especially with art. Minecraft is a structured and peaceful game to play in comparison to the grenade after grenade in most other games, and a true delight to see such an awesome game on the market.

To introduce myself – my name is Dean.

I’m a mid twenties geek (one of cool ones) who enjoys playing competitive card game YU-GI-Oh, playing games online, typically on the Xbox and loves expressing myself through the art of writing, Belonging to clan Dynamite, I spend a lot of  time with my family either online or off and spend and awfully long time travelling to and from my mums house to make sure she’s ok, #respectyourmomma.

Growing up in Burnley, England I know what its like to live a life with nothing to do, but even now as an oldie I have the imagination of a teenager and can always make things happen.

Lover of parties and socialising to break down the hours of TV I find myself watching, at the same time the peaceful life spent away from the hustle and bustle of doing loads at once is nice too.