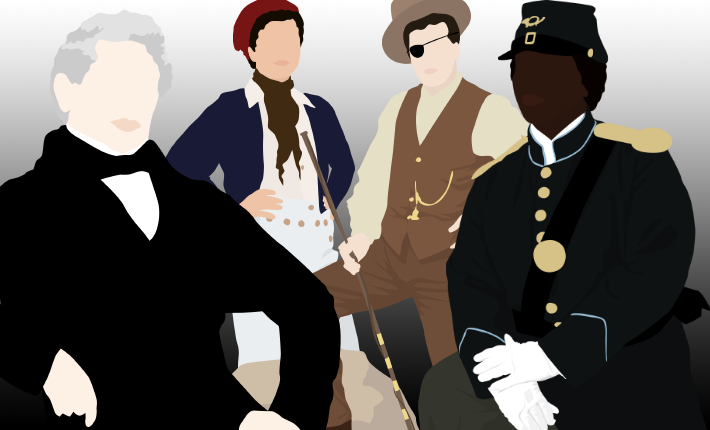 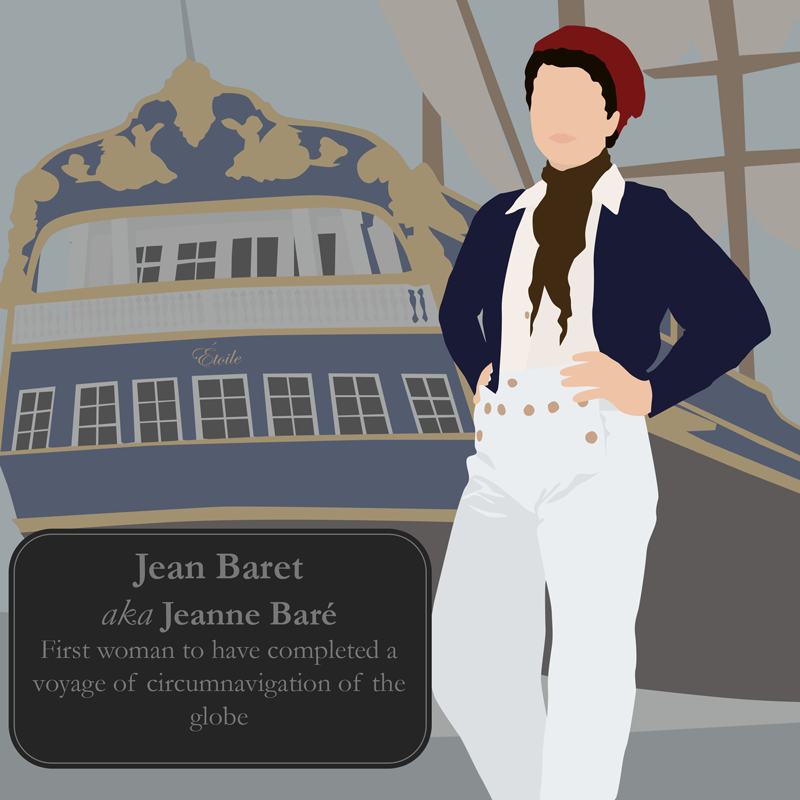 When Philibert was invited by the French government to go on an expedition led by Louis Antoine de Bougainville, Jeanne went along with him, disguised as Philibert’s servant, Jean Barét.

[perfectpullquote align=”right” cite=”Prince of Nassau-Siegen” link=”” color=”” class=”” size=”12″]She dared confront the stress, the dangers, and everything that happened that one could realistically expect on such a voyage. Her adventure, should, I think, be included in a history of famous women.[/perfectpullquote]

The ship sailed all the way to Brazil without the secret being revealed, even though some of the crew members were starting to get suspicious. After many months of exploring the world, collecting and cataloguing plants, the captain finally discovered the truth and threw Philibert and Jeanne off the ship when they reached the island of Mauritius.

The couple stayed there for some time, researching plants and fauna before Philibert died. After some time, Jeanne married a French army officer and was able to return home to France. She died at the age of 67 in the Dordogne region of France. 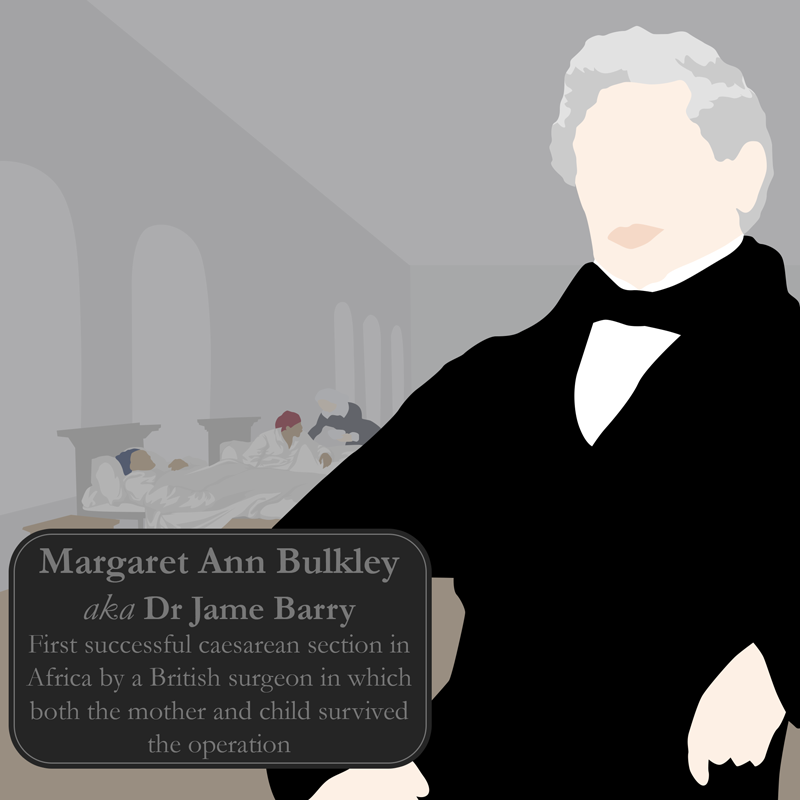 More than 50 years before women in UK were allowed to study and practice medicine, Margaret Bulkley fooled Edinburgh University and the British Army to become the first female doctor in the UK.  Born in Ireland, she moved to Edinburgh to study medicine when she was eighteen years old.

Dr Barry later joined the British Army, serving 12 years at the Cape colony in South Africa, then travelling on to the West Indies, Mediterranean and Canada. She was a skilled surgeon and performed one of the first caesarian sections, saving the life of both mother and child. Dr Barry was insistent that a good diet and clean water were important to health, and was one of the first to demand higher hygiene standards in hospitals.

When she died in 1865, at the age of around 76 years old, her secret was discovered. Some of her closest friends may have known the truth, but for the Victorian society, it was a great scandal. Cathay Williams was the first known African-American woman to join the US army and the only woman of colour to serve in the US army in the 19th Century.

Born a slave in Missouri USA, Cathay was forced to work as a cook and washerwoman in the US army when she was 17 years old. After the US Civil War ended, Cathay was looking for work and decided to join her cousin and a friend and enlist in the army. Not long after joining the army, Cathay contracted a disease called Smallpox which caused her to be hospitalised many times before her secret eventually was discovered. She was discharged from the army.

She moved to Colorado, where a reporter found her and told her story in 1876. It is not known exactly when Cathay died. 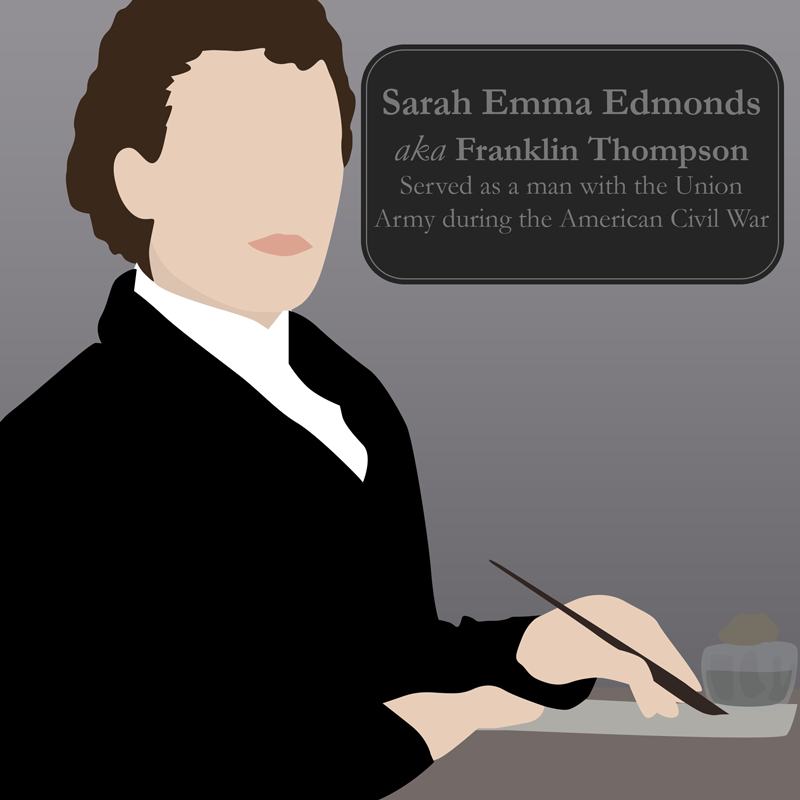 Cathay wasn’t the only woman to enlist in the army during the US Civil War – on both sides of the conflict, it is estimated that over 400 women secretly served. The most famous of these women was Canadian-born Sarah Edmonds, who was not only a soldier but also a spy for the Unionist troops. While disguised as Private Frank Thompson, Sarah infiltrated the enemy lines to gather information. To do this, she disguised herself as various characters, including a young male slave called ‘Cuff’, an Irish peddler woman, and a black female slave who worked in the laundry.

[perfectpullquote align=”left” cite=”” link=”” color=”” class=”” size=”12″]”I am naturally fond of adventure, a little ambitious, and a good deal romantic-but patriotism was the true secret of my success.”[/perfectpullquote]

When she wasn’t spying, Sarah in the disguise of Private Thompson, worked as a nurse. When she contracted an illness called Malaria, Sarah faced a dilemma. If she were to get treatment for the illness, she might be revealed to be a woman. Without the treatment, she might well die. She decided to leave the battlefield and go to a private hospital. Private Thompson was listed as a deserter – charged with running away from the army.

Sarah couldn’t return so she travelled to Washington to work as a nurse. After the war, she wrote a book about her experiences, then met and married a man called Linus Seeyle with whom she had three sons. She later petitioned United States Congress to have Private Frank Thompson’s name cleared. With this, she was awarded a veterans’ pension of $12 a month. Charlotte was born in New Hampshire in the USA in 1812.  She may have lived for some time in an orphanage, but we know that she ran away when she was about 12 years old and started working in a stable in Massachusetts. It is possible that she disguised herself as a boy, and called herself Charley, because she thought it would be easier to get work. The owner, Ebe Balch saw that Charley had talent and then started to teach her to drive a horse carriage. Charley soon became known as the best coach driver in the area.

Charley moved to California and worked there as a coach driver, becoming well known as one of the toughest and most daring drivers – called ‘Whips’. At one point, she was held up by robbers and had valuables stolen from her waggon. The second time she was held up, she was armed with a gun, which she used to shoot the bandit.

A kick in the eye by an angry horse led to Charley wearing an eyepatch, and the nickname ‘One-Eyed Charlie’. Eventually, the years of driving the coaches took their toll, and Charley was forced to retire. She was registered to vote and would have been one of the first women in the USA to do so, but it is never been proven that she cast a vote. Charley died in 1897, and her friends discovered her well-hidden secret. It is thought that Charley had a child at one point in her life, but it’s not clear when, and what happened to the child. A baby’s dress was found in a trunk in Charley’s home.

Thanks to Kat for the illustrations. Kat is a plus size vintage and retro fashion lover, an arty type with a passion for sewing and craft.