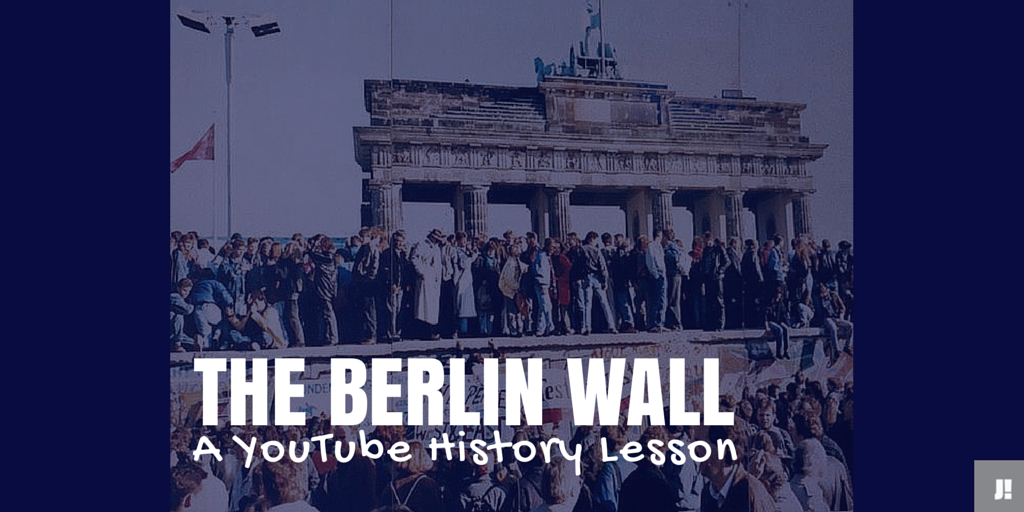 What was the Berlin Wall, and why was the fall of the wall so exciting – not only for Germans but for people around the world?

To understand the importance of this event, we take a good look at the news archives, in a YouTube Kids’ History Lesson – The Berlin Wall.

The agreement between three of the Allies, United Kingdom, United States and the Soviet Union, decided on the future of Germany after World War II. The western part of the country became the Federal Republic of Germany, under the control of the UK, US and France, and the eastern part of the county became the German Democratic Republic (GDR), under the control of the Soviet Union. The capital, Berlin, was divided into four sectors – which meant that there was a West German enclave in the Soviet-controlled GDR.

In this video, you can see the British news report from the Potsdam Conference and find out what it was like to live in Germany at the end of World War II.

The border between the two countries was initially controlled in order to prevent the escape of war criminals. Over time, the Allied zones lifted these controls but the Soviet controlled zone did not, as they tried to prevent their citizens leaving. Between October 1945 and June 1946, 1.6 million Germans left the Soviet zone for the west.

While West Germans regained control of their country, in East Germany things weren’t going well. There were no free elections, and just one political party, the Socialist Unity Party (S.E.D). A lot of buildings and industries had been destroyed during the war. The S.E.D aimed to move the country towards communism – a political and economic system where the state owns the major productive resources, such as mines, factories and farms, and the wealth is shared equally between all citizens.

675,000 people fled to West Germany between 1949 and 1952, so in 1952 the East Germans fortified the border. In this clip, West German guards view the newly erected fence between Lower Saxony and Saxon-Anhalt.

With so many people leaving East Germany and heading to the West, where they could live in freedom, East German production fell, and there were food shortages. The response of the government was to make people work longer hours for less money, which was incredibly unpopular.

The dissatisfaction with their leaders led to protests, and on 17th July 1953 strikes and demonstrations occurred in 250 towns and cities in the GDR. Between 300,000 and 400,000 workers took part in the strikes, which were harshly suppressed by the S.E.D, with thousands arrested and sent to jail.

By the summer of 1961, 3.6 million East German citizens had fled to the west. In a desperate attempt to prevent even more of their people leaving, the East German government built a wall – although their version of events was that the wall was to protect East Germans!

The US president’s words, ‘Ich bin ein Berliner’ are often said to have been incorrect, and that instead of declaring himself to be ‘a citizen of Berlin’, he called himself a jelly donut.

In Germany, the name for a jelly donut varies in different areas of the country. In southern Germany, it is a Krapfen, and in Berlin a ‘Pfannkuchen’ (just to confuse everyone, this is what everyone else in Germany calls a pancake!). In the north of Germany, donuts are called ‘Berliner’.

Some have said that adding the indefinite article, changes the meaning, but since Kennedy wasn’t actually from Berlin, and was just expressing solidarity with the citizens of Berlin, he really didn’t say he was a donut.

It is not known exactly how influential this speech was, as it was not heard by the East German population, but it remains an iconic moment of European history.

Filmed by a tourist in West Berlin, this amazing film shows the escape of three men and a woman. Around 5000 people tried to escape over the Berlin Wall, and it is estimated that around 1000 people died trying to cross along the border to Germany.

From 1982, there was a regular Monday evening ‘Friedensgebet’ – Prayers for Peace, in the Nikolaikirche (Nicolas Church) in Leipzig, East Germany. On 4th September 1989, the first Montagsdemo (Monday Demonstation) in Leipzig followed the prayers, and the idea quickly caught on in other cities and towns. Despite the fear of reprisals from the authorities, 70 000 people demonstrated on 9th October in Leipzig.

You can hear them shouting ‘Wir sind das Volk!’, which means ‘We are the people!’  A third of all Leipzig citizens took part in this demo.

The only country that DDR citizens were allowed to visit, without a visa, was Czechoslovakia. In the summer of 1989, hundreds of East Germans disguised themselves as tourists and headed for the capital city, Prague. Once there, they climbed over the fence of the West German Embassy, to plead for permission to travel to the west. By the end of September, there were around 4000 living in tents on the grounds of the embassy, with rudimentary sanitation facilities. (That means portaloos!). There were so many families living there, that they even started a school for the children.

On 30th September, the German foreign minister, Hans-Dieter Genscher arrived in Prague to talk with leaders from GDR. That evening he gave a short speech from the balcony of the Embassy, much of which was lost in the screams of joy from the crowd!

“Fellow citizens, we have come here today, to let you know, that your departure [screams from the crowd] to West Germany is possible”.

The pressure grew and grew until the East German government could no longer deny their citizens the freedom they demanded. On 9th November, they announced that effective immediately, all travel restrictions were lifted. That evening, East German viewers of western TV heard the news, “This is a historic day. East Germany has announced that starting immediately, its borders are open to everyone. The GDR is opening its borders … the gates in the Berlin Wall stand open.”

People from both sides of the border streamed to the crossing points in Berlin and demanded to be allowed to pass.

When the news reached the West German parliament in Bonn, politicians debated for a while, then spontaneously started singing the national anthem.

And it wasn’t just in Berlin! The East Germans flooded the borders, in their ‘Trabant’ and ‘Wartburg’ cars – the only ones available to buy in communist GDR (and only when you were willing to wait more than TEN YEARS!)

After the Fall of the Berlin Wall

It didn’t stop there! Other communist countries were experiencing revolutions and a move towards democracy.