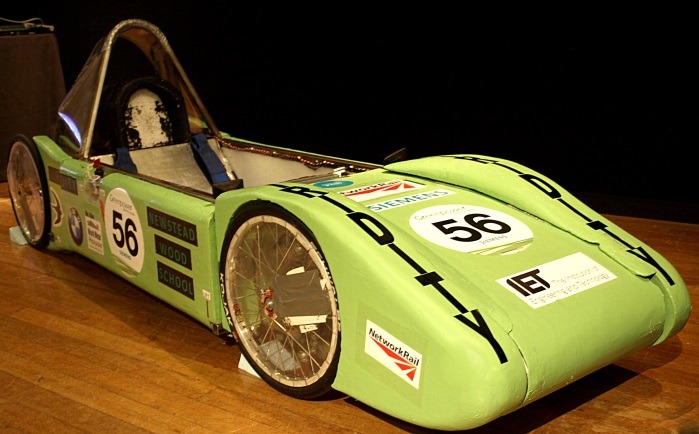 Jump! Mag sent 13 year old Katherine
to the London Science Museum
to report on inspiring women in engineering,
and their fascinating projects

During my day at the Science museum, I spoke to a range of inspirational girls and women who have ignored the fact there are few women in their jobs and worked in engineering. They ranged from 16 years old and working in a club held at school to Audi’s chief engineer for endurance racing, and all had very interesting things to tell. Not one of them let people’s preconceptions stand in the way of their dreams.

To begin with, I spoke to Viridity GRT, so named because they design and drive electric cars – viridity means green. They are a group of 14-17 year olds, who all go to Newstead Wood School and study engineering, although those I spoke to (Ugo, Seray, Anna and Asiyah) were 16 and 17. They drive an electric car run by a battery powered motor, with no steering wheel. Instead, they control the whole car with levers and buttons, while practically lying down. As a result, it is very uncomfortable if you are quite tall!

The car itself runs off a battery similar, but not identical to, a standard road car battery. While actually driving you lie flat, with your feet right at the front of the car and your head back fairly low down. This is a very aerodynamic design, but it does mean that if you are too short you slide backwards and forwards, and if you are too tall you have no room to lie flat, so you bang your knees on the bodywork. The car can reach speeds of up to 30mph, although that depends on the slope of the road and how much battery remains – the first driver in a race gets to go much faster than the others!

Races are usually 45 minutes per person, and at a variety of locations such as Goodwood Motor Circuit and Bedford Autodrome.  One major problem is that these places are not covered, and the car does not have a roof, so driving in the rain is unpleasant, to say the least. In fact, one memorable occasion, although not necessarily a pleasant one, was racing at Dunsfold Park (better known as the Top Gear test track!) in torrential rain. This led to the then black paint washing off and landing on their helmet, so they couldn’t see, and the microphone stopped working, so they also couldn’t communicate. The race had to be cut short, but by the end they were still sitting in a puddle of cold water mixed with black paint. As a result, and also so the car was easier to see, it had to be painted green.

One surprising thing is while Ugo, Anna and Seray all want to do engineering, Asiayh wants to go into medicine. Despite this, they still want more girls to do engineering and science, as they feel this is not common enough. “In fact, I didn’t really know what engineering was until I started this.” Ugo mentioned. “It would be better if girls could learn about it earlier; we all started quite late.” 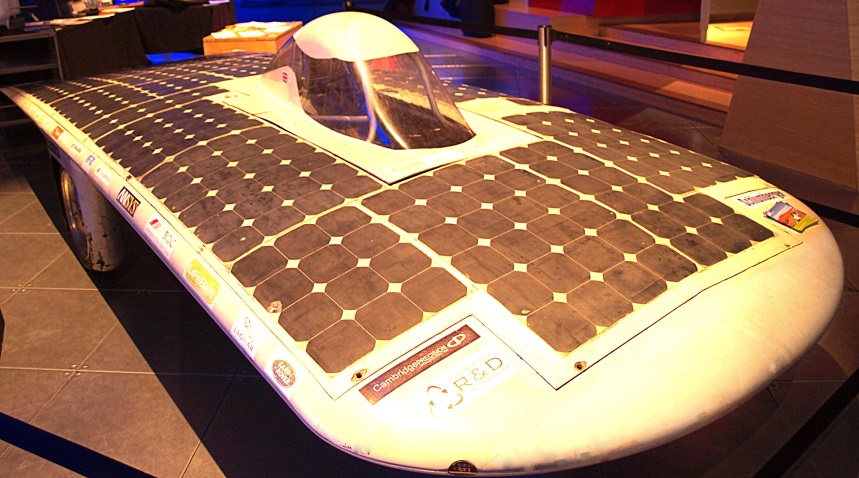 CUER, or Cambridge University Eco Racing, were also there. Lucy Osbourne, Sarah Barrington and Emily Walker are 3 girls at Cambridge who work on the car, and showed me it and the model for the next one. Their cars are solar powered, but are still very strong – they are capable of racing across Australia. They are also built from scratch by the team, so large amounts of funding are required – most of these come from sponsors.

The current car has a top speed of 60mph, and has raced across Australia twice, covering over 6000km in its lifetime. It’s not even as if they have several cars that are fresh for a race – it’s a matter of one car having to survive all that. It is mostly safe to drive though, so long as they make the right choices as to which parts to use. One potential type of tyre has a habit of exploding, so they don’t plan to use that. The new car, however, will have a top speed of 85mph and will be made of a paper mesh layered between two thin sheets of carbon fibre, which makes it extremely strong and lightweight. They tried to break a piece, and ended up breaking the table instead. They have actually discovered that it can be broken, if you use 4 times the weight of one person.  It ‘only’ weighs 120kg – about the weight of four 10 year olds. 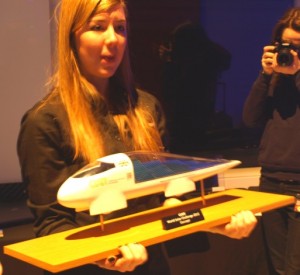 The team is a lot bigger that the three I spoke to, but they were very helpful in answering questions. They don’t have any particular heroes, mainly because there are so few famous women scientists. Lucy explained: “That’s one of the reasons we’re here – to help inspire young people interested in science and engineering.”

They have always been interested in science, but limited opportunities – they enjoy it because it explains how the world works, and of course you don’t actually need to be good at something to enjoy it.

They really value the team atmosphere – when asked about special memories, Lucy said “There was one night when we were making the mould for the chassis in the middle of the night because we were running out of time. That was a real team atmosphere.” Sarah added “Its things like that that really pull the team together.” 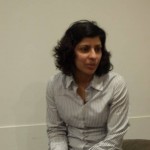 Later on in the day Leena and Teena Gade gave a talk about their careers. Teena went first, explaining about her job as a tester for Skoda, as well as previous jobs, such as when she worked for JCB on their DieselMax – a car that set the land speed record. After that she worked as an aerodynamicist for Williams F1. Then went to rally for Subaru. Then worked on Kris Meeke’s Mini rally car. Finally she started working for Skoda. She also holds a research post at Coventry University – particularly impressive as she has to work abroad all the time for Skoda. Apparently she doesn’t particularly like being one of the only women, as sometimes people treat her differently, but other than that it doesn’t bother her. “The only barriers are ones you create yourself” she said.

However, she also described the things you need to think about when designing a rally car. Apparently rocks are one of the most important things. They can do a lot of damage to a car, and while you could just make it really big and really strong, that would just be a tank, and you would not win. You also need the best tyres for grip, and 4 wheel drive. And dampers. And it needs to be serviceable when in a hurry. The list is endless. You also need to be prepared for odd events, such as being able to work out why the engine suddenly stops. It also involves something called the ‘signal to noise ratio’ – working out what feedback is useful, and what is totally irrelevant. Her advice if you want to achieve something: ask questions, learn from mistakes and apply that in the future, go for all opportunities, no matter how small they seem, and work hard. 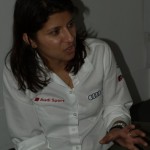 Leena explained about her job as Audi’s chief engineer for their endurance team. This means she is in charge of 8 mechanics, 1 assistant engineer, 1 data engineer 2 engine engineers, 1 gear box engineer, a few background engineers and the 3 drivers. She recently was in charge of the team that won Audi their 10th victory at Le Mans, a 24 hour endurance race famous for its length and size.

She became interested in engineering when she was 12, but then became interested in motorsport when she was 14. She reckons being girls gave her and her sister an advantage, because people are more likely to remember them because they are unusual, but also a disadvantage, because people’s natural prejudice means they need to be better than the men in order to be seen as equal.  Apart from winning, she particularly enjoys meeting so many different people from different places who all have the same aim: to win. She says that the best way to get noticed is to do any work for anyone related to what you want to do whenever possible, be prepared to take any job and never give up.

All these people are working in what they want to do, and are all successful despite any gender bias in their business. They all say similar things: don’t give up.

Katherine is 13 and loves playing music. She plays the violin, the bassoon and the piano. She also loves horse riding and computers.  Her favourite subjects at school are Maths and Science.


She visited London Science Museum to interview the guests of the High Performance Festival, celebrating scientists and engineers who make our world faster, brighter and better.

Jump! Mag would like to thank the organisers of the High Performance Festival for welcoming our young reporters and allowing them to interview these inspiring women and girls.