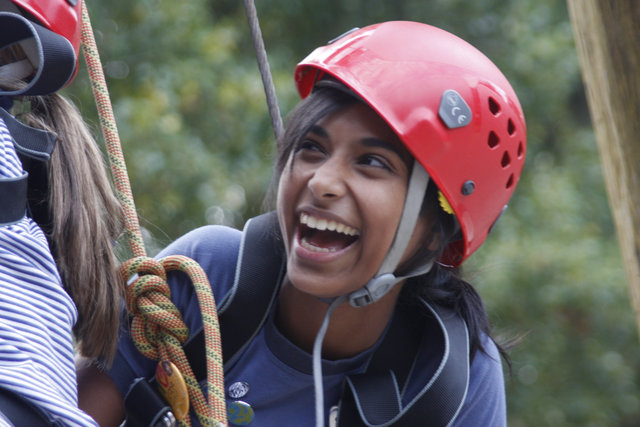 My name is Isla Whateley, I’m a 17-year-old Girlguiding member from Glasgow and a member of the charity’s youth panel Advocate. We discuss issues affecting girls and young women and look for ways to seek change.

Every year, Girlguiding publishes research into the opinions of girls and young women in the UK, called the Girls’ Attitude Survey.  The findings from the latest report show that girls and young women are experiencing shocking levels of everyday sexism and discrimination at school, on the street and online.

For example, 75 per cent of girls aged 11-12 say sexism affects most areas of their life, 87 per cent think women are judged more for looks than ability and one in five 7-11 year-olds say they have been on a diet.

Personally, I feel that sexism in school has a huge effect on girls my age. I experienced harassment from boys in my class when I was 13, and it significantly lowered my self-esteem and confidence to the extent where I would be scared to even talk to boys in fear of being mocked.

A statistic that particularly shocked me was that one in five 7-11 year old girls have been on a diet, and I feel this clearly shows the huge pressure girls and young women are under to look a certain way (which is almost impossible to do healthily), hence perpetrating low self-esteem and negative body image in girls as young as seven! I didn’t think that these pressures could have an impact on girls at such a young age.

It’s really hard for young girls to aspire to be what they want to be because they are constantly being bombarded with messages telling them that they have to do certain things so that men will find them attractive, hence implying that that’s the only way to be successful in life. There’s definitely something inherently wrong with that.

I’ve been part of guiding since I was five, but only in the past two years have I really got involved. I am a member of The Senior Section and attend a Ranger group every week. It is  the highlight of my week. My friends at Rangers have helped me through so much, and after attending numerous camps, events and Duke of Edinburgh expeditions together, the bond I have with them is unique and irreplaceable.

This year, joining the  Advocate youth panel has given me the opportunity to be even more involved with Girlguiding and act as a spokesperson, as well as allowing me to think more about important issues that affect girls and young women.

Within guiding, things that might matter elsewhere don’t matter. Your background is completely irrelevant and you can socialise with a different group of people than you would otherwise. Guiding can help distract girls from some of the issues raised in the report, through all the fun activities girls can get involved with, as well as educating them about how to deal with these issues and how we can help to combat them.

In the future, I hope we can live in a world where men and women are treated like absolute equals – with a true representation of women in government, businesses, academia and other currently male-dominated environments. And how can we get to this kind of ideal society?

The key is education. If we were just taught in school how to treat other people with respect, these issues could (with a bit of effort) be resolved. I also think there is a clear lack of positive female role models in the media, which can definitely hinder aspirations of girls, so I think we could do with some more of them (politicians, authors, businesswomen, etc).

Male behaviour that counts as harassment needs to stop being excused as “banter” or “boys will be boys”. Even from a young age, boys need to know that women should be treated with respect and this message needs to be even clearer as they enter their teens, in order to stop the catcalling, rude comments and harassment that many of us face regularly.

With enough effort and motivation, I believe we can strive towards true equality.

Thanks to Isla for contributing this great article, and to the Girlguiding organisation for their great work in inspiring girls and young women.
Pictures courtesy of Girlguiding