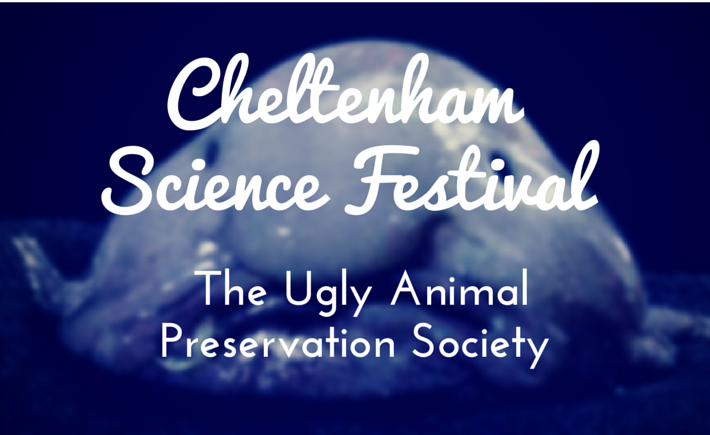 Our Science Editor, Sam Gouldson went to the Cheltenham Science Festival, where she met the team from the Ugly Animal Preservation Society.

Why are people so concerned about saving and protecting cute and fluffy species like the panda and the tiger, but less bothered about the dromedary jumping slug or the blobfish? This was the reason for the first talk I attended at Cheltenham science festival and it was absolutely fascinating.

Although extinction is natural, human activity means it’s happening up to 10,000 times faster than it should; in terms of mass extinction events, humans are more deadly than an asteroid strike! Simon Watt, the founder and president-for-life of the Ugly Animal Preservation Society, argues passionately that so-called ugly animals are just as worth saving as their adorable counterparts. He makes some good points – of the 8.7 million species currently on our planet, 95% are invertebrates and most of them are insects. Why do furry mammals get all the attention?

Simon suggested that we need to look after these animals not only because they’re equally deserving of our care but also because each one is an amazing example of evolution and plays a unique part in its ecosystem. The lamprey, for example, evolved before chins appeared and so it has a mouth full of inward pointing teeth with which to attack its prey. If the Canadian blue-grey taildropper slug is attacked, its bum falls off – the predator eats it while the rest of the slug makes a quick (ish) getaway. Not only do ugly animals deserve to be saved from extinction, they can actually be helpful to humans. Some frogs have skin which contains chemicals that can cure the deadly MRSA infection; the axolotl is able to regrow a lost limb within 3 weeks and is helping research scientists across the world.

I spoke to Simon after the talk, and asked him what Jump! readers can do to help protect endangered species – whether ugly or not! His reply was that we all need to take care of our local environments as well as worry about species far away. We need to recycle as much as possible, and we need lots more scientists to learn about and protect our vanishing creatures.

Oh, and I think the blobfish is actually pretty cute!