Spaghettieis (as they call it in Germany) belongs to German summers like sunshine and open-air swimming pools! In almost every town in the country, you will find an ice cream parlour that sells this delicacy. But what is Spaghetti Ice?

You may think that combining spaghetti and ice [cream], that it must have been invented in Italy, and you are almost right. It was invented by a man called Dario Fontanella, the son of Italian immigrants in Germany.

Dario and his family lived in Mannheim, in the south of Germany. In 1969, he was eating pureed chestnuts, and he had the idea of trying it with vanilla ice cream. But what could he use to push the ice cream through? 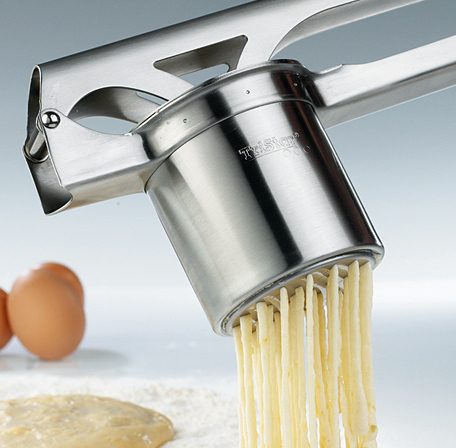 A favourite meal in the Schwabian area of Germany where he lived is ‘Spätzle’ – a kind of mini-dumpling/pasta.

One way to make Spätzle is to use a potato press, and this is what Dario used to make his Spaghettieis!

So, Mario took the wonderful ingredient of his ancestors, and mixed it with the ‘technology’ of their new home!

Here Cat demonstrates how it is done:

Mario’s top tip for making perfect Spaghettieis is to use creamy vanilla ice cream, and a chilled potato press.

He does sometimes wonder if he should have patented his invention – which means that anyone who copied his spaghettieis would have to pay him – but at the end of the day, he’s happy that anyone who wants to eat Original Spaghettieis has to go to Mannheim!

The story of spaghetti ice shows what happens when people move from one country to another – they mix the traditions of both countries, often with quite spectacularly successful results!