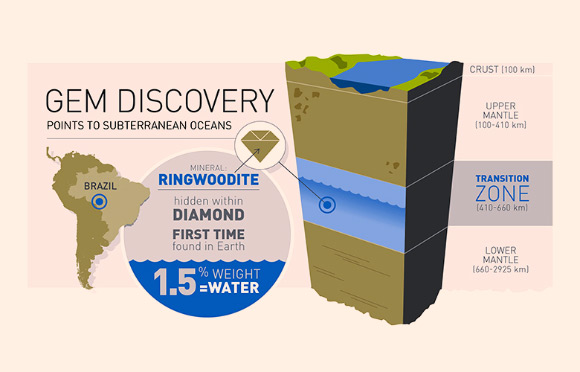 How was it found?

A team of scientists studied the waves of energy, known as seismic waves, that move through the Earth after an earthquake. In fact, they studied the waves generated by more than 500 earthquakes! By measuring how fast these waves moved, the scientists were able to work out which types of rock they were passing through. When the seismic waves reached the layer of wet ringwoodite, in what is known as the transition zone, they slowed down because it takes longer for them to pass through wet rock than dry rock.

Is it really an ocean?

Not exactly. It’s more like a water-logged sponge; the water stays inside it until it’s squeezed or put under pressure. Steven Jacobsen, the team’s leader, describes the layer of wet ringwoodite as “Rock with water along the boundaries between the grains, almost as if they’re sweating”.

Why is it so exciting?

For a long time many geologists (scientists who study rocks and the Earth) believed that our planet’s water came from icy comets that melted when they crashed into the surface. This new discovery suggests that a different theory may be right, and that the oceans gradually oozed out from below the Earth’s crust. Although the team has only examined the ringwoodite beneath the United States of America, they believe that it extends far around the globe and will soon be studying other areas to see if this is true. 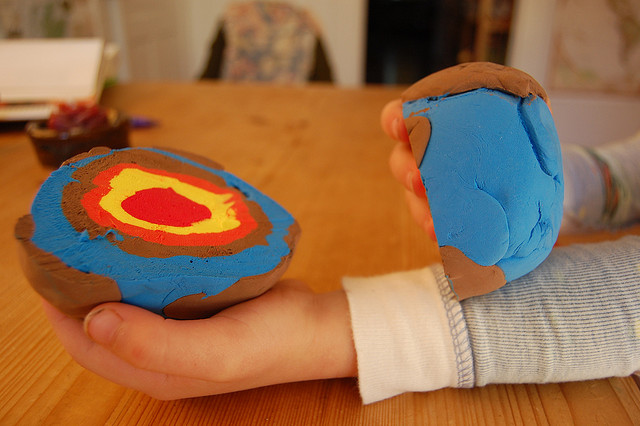 Also, until now, most rock in the mantle was thought to begin melting at just 50 miles below the surface. Finding a layer of wet but solid rock 400 miles down suggests that there are far more interesting things happening in the mantle than anyone realised. And the water trapped in the ringwoodite isn’t water as we know it, it’s in an entirely new form. It’s not liquid, ice or vapour but is fused into the rock.

We should be very grateful for the layer of ringwoodite that’s trapped the water permanently in the transition zone. Jacobsen has pointed out that if all the water contained in the rock was on the Earth’s surface instead, only mountaintops would be above water. And my swimming’s not that good…

Featured Image by University of Alberta

You can find out how to make the Earth Core Models here.