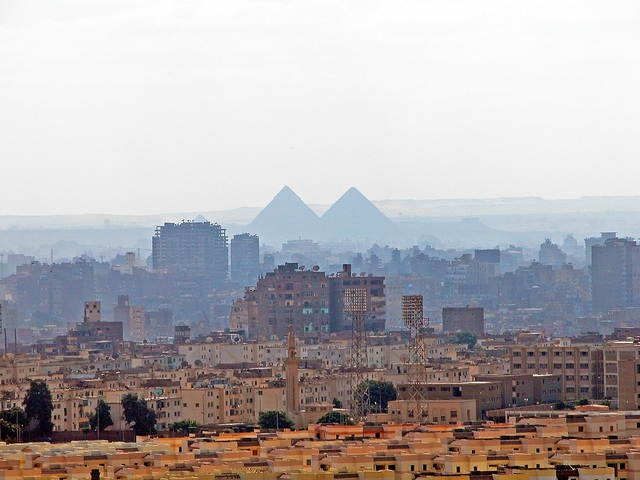 Have you ever visited Egypt? Or even just travelled in your imagination to see the pyramids and the Sphinx? Well, now we are going to travel back in time along the path of the word itself, to see where it came from.

Like the country and the civilisation, “Egypt” is a very ancient word. We can find it in Old English as Egipte, which came into English from Old French Egypte. You might think that this is not very exciting so far – after all, not much appears to have changed!

But let’s take this one step further back. To Latin Aegyptus, which is simply a form adapted to suit Latin, of the Greek Αίγυπτος (Aigyptos). We should note here that the Greek letter γ (gamma) is never pronounced as a soft g, like in “gel” or “ginger”. It is either a hard g, like “goal”, or it is a y sound, like “yellow” or “you”. This should make the next step in our journey easier to see.

In Ancient Greek, Aigyptos meant “the River Nile” or “(the whole country of) Egypt”, but in fact it comes from the Late Egyptian language, known as Amarna, in which it was Hikuptah, and it meant “temple of the soul of Ptah”.

Ptah was the ancient Egyptan god of art, crafts, creation and fertility. You might be wondering how the this became the name of the country. Well, originally it wasn’t. It was the name for the city of Memphis, of which Ptah was the protector, and where stood a temple to Ptah. It was expanded by the Greeks to mean the whole of Egypt.

Of course, we cannot mention a later Egyptian language without also going to the earlier form! This would be Hut-ka-ptah, meaning the same as the Amarna form. Some people disagree that the Greeks used the Late Egyptian form, and suggest instead that the Greek form was adapted from Akkadian, a language that is now dead, but was once widely spoken in that part of the world. Either way, there was little difference between the two.

In modern Egypt, the main language spoken is Arabic, which is also the official language. There are many different versions, or dialects, of Arabic, and the local version is known as Egyptian Arabic, or Saidi Arabic in the countryside. But did you know that there are also other indigenous, or local, languages?

All of the following can also be heard, spoken in minority communities:

There are also large immigramt communities speaking Greek and Armenian.

Egyptian Arabic is the most widely understood dialect of Arabic.

The official name for the country in Egypt itself is the Literary Arabic form Misr, which is pronounced as Masr by many ordinary Egyptians.