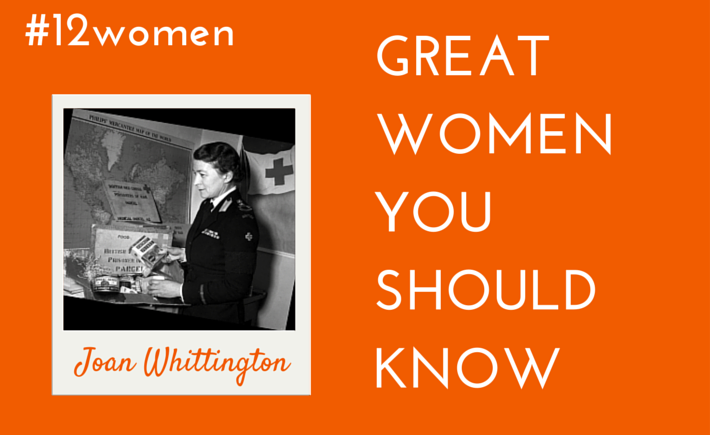 Joan Whittington was 32 years old and working on her parents’ farm when World War II started. She was considered a little odd because she hadn’t got married and had children, unlike most women at that time. But Joan saw the outbreak of war as a chance to leave her restrictive life behind and immediately volunteered for Red Cross active duty as a nursing assistant.

After three years working hard, learning quickly, and taking on bigger responsibilities, Joan was sent to the front line to care for badly injured troops. Taking a dangerous voyage to North Africa, she rode around Cairo on a large motorbike looking for missing soldiers so that she could report back and reassure their families in Britain. From Egypt, she took a jeep to Naples by ferry, and drove herself through war-torn Italy to her new post in the north of the country.

In Italy, Joan co-ordinated care and activities for every hospitalised soldier in the region, fearlessly confronting senior commanders to demand the comforts her injured charges needed. Determined to keep spirits up, she even persuaded Gracie Fields – the 1940’s version of Rihanna – to come and perform in a warzone! Joan remained there until the war finished and – as you would expect by now – travelled home not in the relative comfort of plane, train or boat, but driving a Chevrolet saloon across many hundreds of miles of desolate battle-scarred countries until she reached England.

And once back home, Joan retired into a quiet life back on the farm. Joke! Of course she didn’t. She took a few months out to be awarded an MBE, take part in a victory parade and address the International Red Cross conference in Stockholm, and then it was time to find some new challenges and adventures.

Joan’s next job was travelling to the U.S and the Caribbean to set up new Red Cross branches and train their members how to care for the victims of natural disasters. Over the following two decades she repeated that work in some of the world’s poorest and most isolated nations, from Kenya and Uganda to Borneo and Fiji, establishing hospitals and air ambulance services all over the world and saving thousands of lives in the process. She survived tidal waves, earthquakes and civil wars, but continued her arduous and dangerous missions until she was almost sixty years old.

And for her retirement? She settled into the Whittington version of the easy life: overseeing trials as a Justice of the Peace, and starting a large Boy Scout troop. She visited prisoners and campaigned for their rights, and added an OBE and a CBE to her collection of honours, although very few people outside of the Red Cross knew of her incredible achievements. After decades of changing lives all over the world, she dedicated her later years to serving her local community.

It seems so sad that not many people know about Joan Whittington’s bravery, toughness and dedication, but her naturally modest and practical nature may have been the main reason for that. As she herself simply said, shortly before she died in 1980: “(I worked) to bring people together to help other people which, after all, is what we want in the world today, isn’t it?”