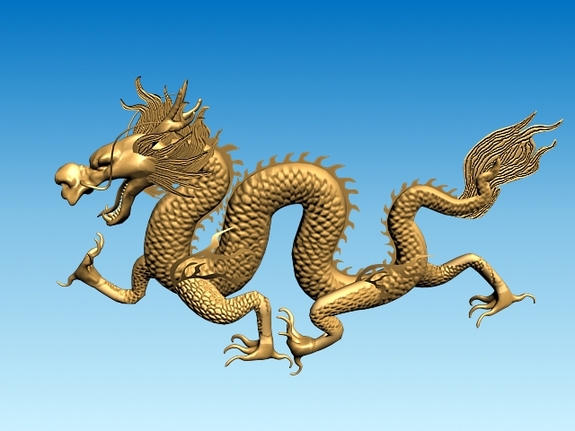 A chapter story by Iona…

Once upon a time, in ancient China, there lived a wise and mighty dragon. His name was Cha-Cha. He being a magical dragon, he had many enemies. Among these were an ancient race, whom battles with Cha-Cha had all but killed off.

Only one remained. He was the great ”Earth Traveller” or E.T. for short. E.T. could take many forms, including a long pink one that he had to fill in for the birth of his 100th son.Other than these he could take the forms of fearsome animals, such as a tiger, a snake or a badger.

On this particular morning, E.T. woke up steaming with unaccountable ferocity, to find that he had set the bed on fire. He looked down, and saw to his dark delight, that he had become a dragon. He leapt out of bed, singed a hole in the wall and slithered off to the sea. He sat a while on the shore, smoking and cursing the world, when a thought struck him. ”Why don’t I go and pay a visit to my old friend Cha Cha,” he mused. and with that, he crawled down to the ocean in which Cha-Cha and his wife made their home. 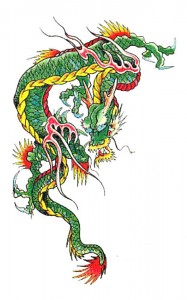 Cha-Cha awoke with a bump. He had fallen out of bed, again. He grumbled as he rubbed his head. He put on the clothes draped over the chair from last night, turned around and fell over. He had put on his wife’s dress by mistake. He cursed and swore, wishing that whoever had placed his wife’s dress on the chair would have legs made of jelly, and collapsed. He was now in a rage, as he righted the curse and went to remove the dress. Then, the pungent aroma of burnt toast drifted up from downstairs. He hopped over to the stairwell and yelled to his wife.

When she didn’t reply, he sighed and tumbled downstairs. He landed with a bump at the bottom. He looked around a he stood up expecting a laugh with his wife. ”Look, dear, I accidentally…” Imagine his fury, his outrage when he looked up and saw not, his doting wife, but his worstestestest enemy! He gave a cry of anger, and with no further ado, set upon the toast burning E.T.. 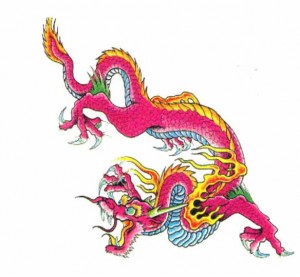 His wife, hearing the tussle came in from the garden, and stood, petrified on the threshold. when she came to her senses, she reached for the telephone receiver with a quaking tentacle, and called the local library, who came tearing round in a blaring purple van. when the librarian entered the house, her immediate thought was for the books on the shelf behind where the dragons were fighting.

she rushed over, ignoring the immediate danger, and began stroking their spines, saying soothing words and calling them silly names like ”How to be a domestic Goddess,” and ”Delia Smith’s complete cookery course” Cha-Cha’s wife glared at her, and reached for the telephone again, but before she could grab hold of it, the door burst open, and in stormed E.T.’s 100th child burst in.

”Father! Father, you have behaved like a perfect pig to these Put The Telephone Down Mrs Serpent poor innocent ignorant serpents, now please will you Mrs Librarian Will You Leave The Books Alone And Shut Up apologise, father, No Give Me The Poker Cha-Cha Its No Use Trying To Sneak Up Behind Me That Mirror Over There Serves As A Perfect Third Eye and give them back their toaster. Thank you. Now you can go and sit on the naughty step.”

(At this point the librarian was snivelling in a corner because of the lack of punctuation and inappropriate usage of capitals. in her spare time she worked for the local school as an English teacher.)

To all spectator’s amazement, the great hulking dragon changed into a house-elf and slunk off out of the house and swam back to the surface of the ocean.

”I have my reasons.” replied Li-Wang.

”We are eternally grateful.” chorused Cha-Cha and his wife

”If there is ever anything I can do,” said Cha-Cha ”I’ll be hanging around. It comes with eternal life.” 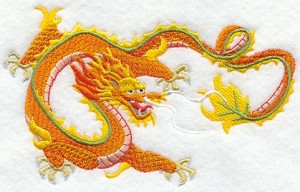 I am 13 years old. I am home-educated, and have never been to school. I love writing poems, stories, and play scripts, but I also write my own music. My ambition is to become an opera singer.

I originally wrote this story as a competition entry, but sadly, it was too long to fit the requirements.