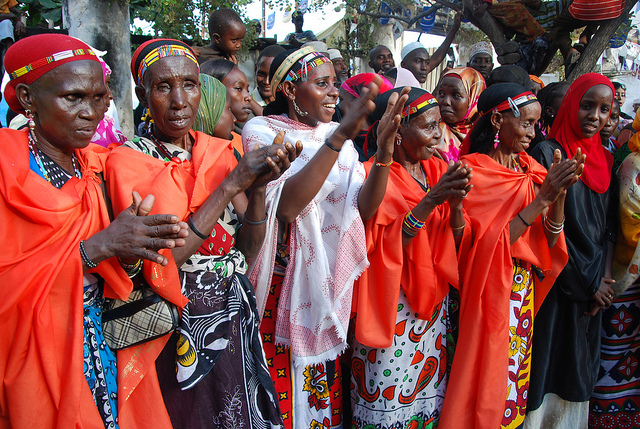 What do you think of when you hear the word AFRICA?

Do you think of safaris? And villages?

You might think of drums and dancing. Or do you think of something else?

These are stereotypes of Africa, which means they are a conventional, over-simplified image or impression of the country.

It is what we imagine the country to look like, just as some tourists who visit Britain might expect to see scenes like this on every corner:

Is that what you see when you leave the house? Cottages with telephone boxes, pipe bands, cream teas and rain. Well, you probably see a fair bit of rain if you live in Britain – and that is why stereotypes exist. They are generally based on something true, but do not show the full picture.

If you were to show the full picture of life in Britain it would take much longer, and involve many more pictures. Anyone looking at these images would, however, know which country we were referring to.

The same is true for Africa. If I were to show you this picture, would you have known it was in Africa?

Probably not. It looks like any other city in the world, but it is indeed in Africa.

It is the capital city of Kenya, Nairobi. The name comes from the Masai ” Enkare Nairobi”, which means “cold water” and refers to the river Nairobi, which gave its name to the city. An estimated 3 million people live in Nairobi, which makes it almost half the size of London.

The great thing about travelling to a different country is that you get to see the real country, not just the stereotype. You can talk to people there (if you both speak the same language) and see how they really live.

You can see beyond the stereotype.

Later this year, our founder and editor Lynn Schreiber will travel to Kenya.

She will be writing articles for Jump! about the rights of women and children. She will speak to local women and children, to youth group leaders, to doctors and nurses and teachers. Before, during and after her trip she will share her findings with you.