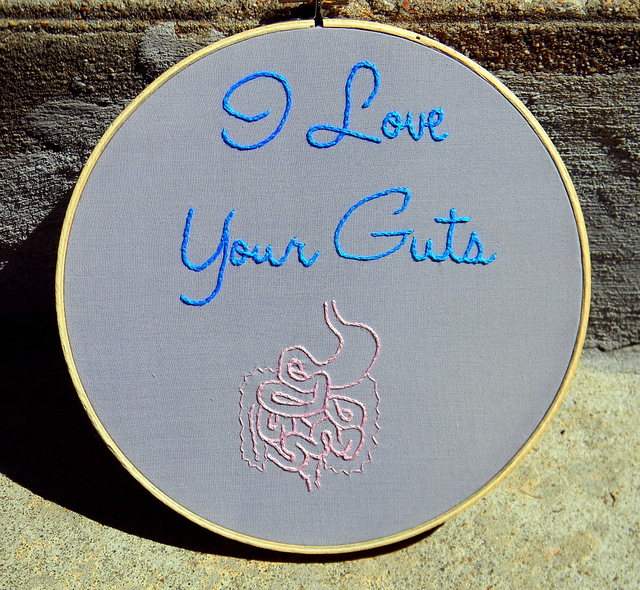 After talking about bones in my last article, I thought I’d go on to talk about poo, or at least how it’s made.

I like eating. I think a lot of people do. Biscuits are a particular favourite…chocolate Bourbons especially. But how do we get from biscuit, or apple, or stick of celery to the brown stuff we call poo.

Well, it’s thanks to the digestive system, which starts at the mouth, and runs all the way to our bottoms. So let me take you on a guided tour.

Lets start with our mouths. At the front we’ve got lips. They’re useful for talking, by helping us form our words,  and without them our food would fall out the front of our mouths. Which would make an awful mess. After the lips, we’ve got teeth, which help break food down into small pieces. Along with the tongue, the teeth help us break the food down into easily swallowable-ble chunks. Dotted around the mouth are salivary glands, which make spit, which is called saliva. Saliva contains chemicals called enzymes which start to digest the food, and help us get all the good stuff out of it.

Next stop, the oesophagus, or food pipe. This moves food down by a serious of muscular movements, a process called peristalsis. From here we hit the stomach, where strong acid and digestive enzymes turn our solid food to a gloopy liquid. Next stop the duodenum, jejunum and ileum, which form the small bowel. Around this point, an organ called the pancreas makes more enzymes which are squirted into the duodenum to further break down food.

The small bowel digests and absorbs nutrients, like vitamins, minerals and fats, that go into make us who we are. So we are literally what we eat. That’s why fruit and veg is better for us than chips and burgers. Just on the right under your ribs sits the liver, which does LOADS AND LOADS of important things, but also makes a green goo called bile, which is a bit like washing up liquid, which helps us break down fat in our diet.

From here which hit the large bowel, which is called the colon, and here water is taken back into the body. Then it pops out the bottom end (called the anus) as poo, which is also known as stool, faeces and actually by quite a lot of other names.

So food goes SOLID → LIQUID → SOLID (which is poo!) and we get lots of useful chemicals out of it, which gives us energy and builds our bodies.

Dr Matt Piccaver is a General Practitioner (Family Practitioner) based in Suffolk, UK. Originally trained in Forensic Science, he went on to read Medicine at Cambridge. Dr Piccaver is a passionate advocate for patient education, and believes that no one has the monopoly on knowledge. After all, doctore means “teacher”.