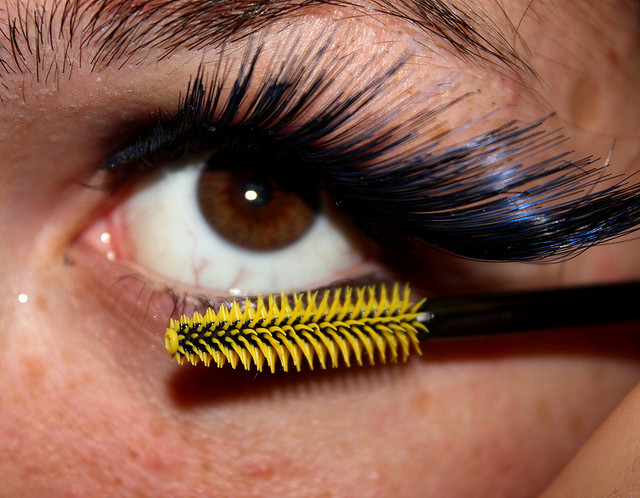 At school today I was talking to a friend and he was telling me about the random thoughts that he sometimes thinks about. One of the many philosophical thoughts that were swooping round in his crowded head was; ‘why do girls wear make-up and boys don’t?’

Then that got me thinking. Boys have every right to wear make-up just as much as girls have the right not to. Both genders try to make the best of their bodies by doing exercise, being healthy and wearing nice clothes as well as many other things.

However it is only the female sex that seems to feel the need to plaster themselves with lots of overpriced concoctions that can affect their natural beauty.

Although it is up to the girl in question when ether they want to wear make-up, it starts off with social pressure at school. The minute the ‘it girl’ of the moment starts to wear the stuff, it’s a dash to Boots to get the latest mascara, eyeliner, lip-gloss and whatever else you need to feel happy. And once the routine of morning make-up is set in stone, it is a hard one to break.

Confidence is another thing that keeps those make-up brands in the money. Boys can suffer from lack of confidence however- in my experience- nothing like the girls do. Everyday can be a competition of everything, from hairstyles to even skirt size so a quick brush on the face can bring up the confidence of any girl in question.

Believe me I know, last year I couldn’t face going to school without any mascara on at least because, even though the girls in my year at school don’t wear make-up, I felt like all of the girls were so much prettier than me I needed to catch up somehow. But then some of the girls started to tease me about wearing it so I stopped.

However make-up doesn’t have to be something to hide behind. It is also a plaything, something that is definitely equivalent to dressing up. Creating colourful designs on your nail, trying pastel lipsticks and making sunrises on your eyelids are just some of the many challenges that I have enjoyed during my experimental hours.

I would just like to round off by saying that I think everyone has a right to look whatever way they wish so long as it’s not offensive. I know that some people need and use make-up like a drug and that’s not a bad thing.

Make-up isn’t the terrible thing I’ve been making it out to be, it’s just I feel that everyone, from tweens to OAP’s, should have more confidence and be more happy with themselves.

I guess I’m lucky because my own year group aren’t really into make-up and only really wear it to parties so I slipped the net of that habit, for now at least. I hope that I might have alerted some girls to the fact that make-up is not a necessary and other younger girls to the reasons why it is worn.

I’m Maia and I’m 12 years old. I live in Scotland with my parents and my younger brother and sister. I love reading, playing netball, watching movies, talking with my friends and writing. My favorite subjects are English and History.

I have recently started secondary school and some of the girls in my year have started to wear make-up. A boy in my class noticed this and was talking to me about it, thus the inspiration of my article.