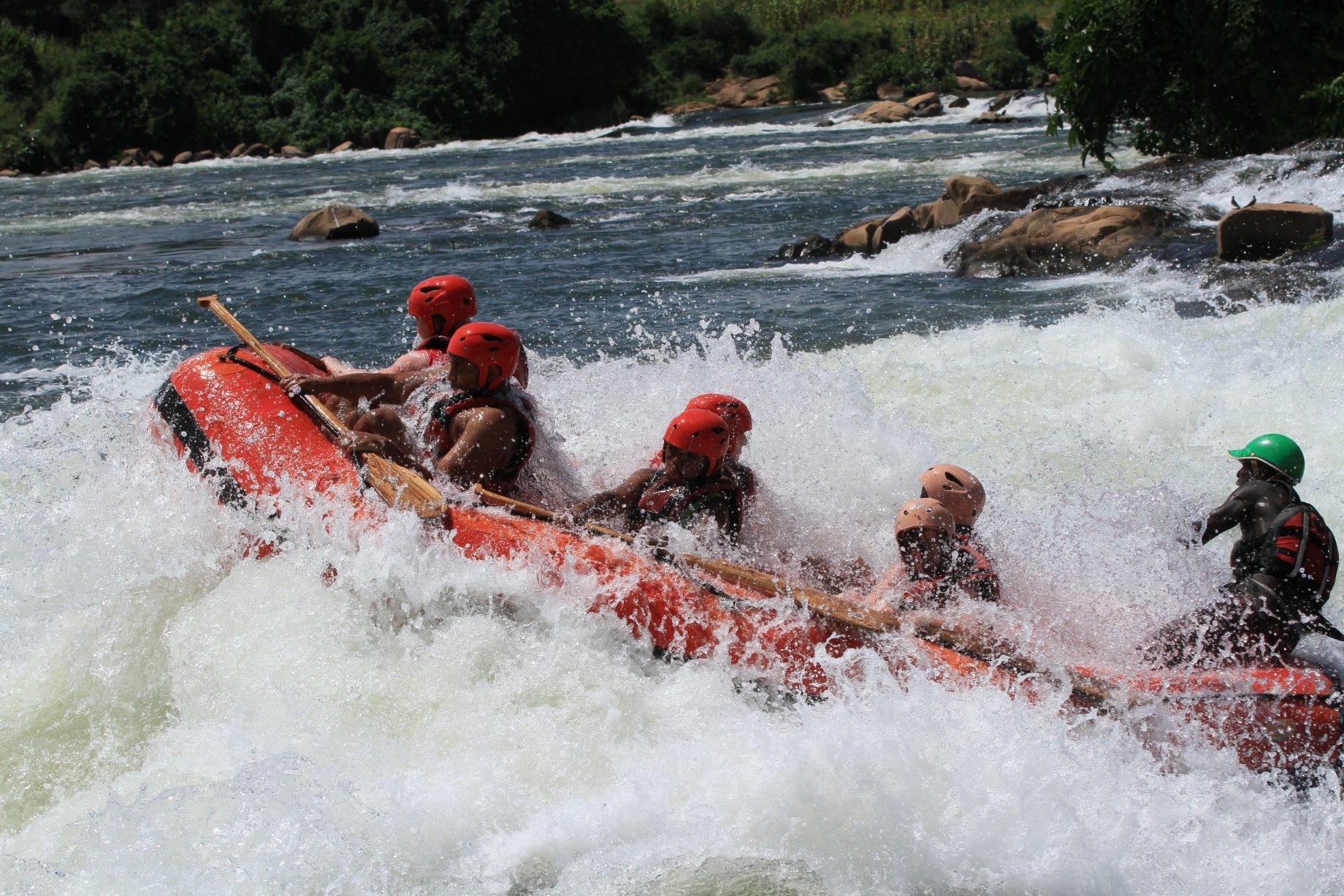 On my second day in Uganda, we went white water rafting on the Nile, near a town called Jinja. The rapids are just 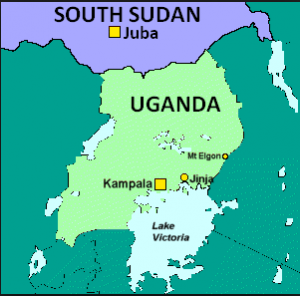 down river from Lake Victoria, which is where the Nile starts.

The rapids are caused by the force of the water as it crashes over rocks and around islands in the river. There used to be more rapids there, and the famous Bujugali Falls. However, a couple of years ago a dam was built across the river, which has made part of it more like a lake and has increased the water levels, wiping out lots of the rapids, including Bujugali. However, below the dam, the rapids are still just as scary! The rapids are a favourite for rafters and kayakers all over the world.

The rapids are caused by the force of the water as it crashes over rocks and around islands in the river. There used to be more rapids there, and the famous Bujugali Falls. However, a couple of years ago a dam was built across the river, which has made part of it more like a lake and has increased the water levels, wiping out lots of the rapids, including Bujugali. However, below the dam, the rapids are still just as scary! The rapids are a favourite for rafters and kayakers all over the world.

I was really scared before we went because I don’t like falling into water, and I’m not a very good swimmer! However, we were given our life jackets and helmets, and we met our guide, Alex, who gave us a safety briefing and taught us how to paddle, how to crouch down in the boat and then flipped the boat so we could practice falling in! There were about 8 boats in our group. 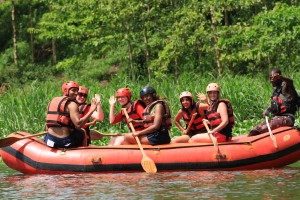 If the boat flips, you have to try and keep hold of the safety rope around the edge of the boat, as well as keeping hold of your paddle. Sometimes you can end up underneath the boat, if that happens you have to duck under to get out again. Some parts of the river are quite shallow or rocky, so you need to keep your feet up. Each boat also has a safety kayaker, which is another guide in a kayak who can come and fetch you if you fall put of the boat! Luckily, there’s no hippos, crocodiles or anything dangerous in this part of the river!

We were on the river for about 5 hours and covered a total distance of 25km. In that time we rafted 9 rapids: Overtime, Retrospect, Bubugo, Super Hole, the Bad Place, Vengeance, Hair of the Dog, Kulu Shaker and Nile Special. Out of these, Overtime and the Bad Place are Grade 5 rapids, generally considered to be the biggest type of rapid you can actually raft on. Grade 6 rapids are thought to be impossible to raft on!

In between the rapids are lots of stretches of flat, calm water. Some people swam and jumped in from the boats on these parts. The flat water was a great chance to spot some wildlife, including Fish Eagles, Weaver Birds and Monitor Lizards. Whilst we were on the flat water, we also had our lunch of fresh pineapple and sugary biscuits, to give you energy. To cut the pineapple up, they pulled one of the kayaks up over a raft to use as a chopping board. 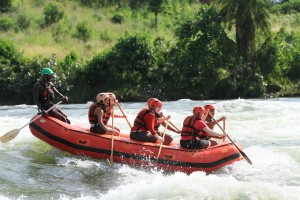 All of the rapids were different, some had big waves, some were really fast, others could be rocky, one even had a 12ft waterfall that we plummeted over! But they all had one thing in common, they were all WET and SCARY!!

Alex was a great guide and knew exactly how to get into and around the rapids so we were less likely to flip the boat or fall out. In fact, he was so good that we got to the last rapid of the day, Nile Special, without anyone having fallen in! In the end, we all agreed that having come so far, and having done so well, that actually we did want to flip on the last rapid.

Now, I wanted to flip, but I was REALLY SCARED. However, I knew that Alex was a good guide, and I’d seen how the kayakers had gone to help people who had fallen out of the other boats, so I decided it was time to be brave and go for it! Alex told us that this was a nice rapid, because there were no rocks and no really dangerous bits, so if you fell out you could just swim through it to the other side, before getting back in the boat.

Just before we hit the really big wave, Alex spun the boat sideways, which meant we were definitely getting thrown out! Next thing I knew, I was underwater and all I could see were green bubbles. It felt like I was underwater forever! When we did the safety briefing, they told us it would seem like ages, but would only actually be a few seconds. I started to count, and before I could even get to 3 I had popped back up again, though the waves kept crashing over my head! I was supposed to try and hold onto my paddle, but I didn’t have it when I came up. Luckily they float, and my friend had managed to collect 5 before she got back in the boat! One of the kayakers got me to hold onto his kayak and pulled me back into the middle of the river, then let me swim down to where one of the rafts was waiting.

We had to do lots of swaps after that, as everyone got muddled up in different boats after most of them flipped. As it was the last rapid, we paddled to the riverbank and loaded the boats onto the waiting trucks. After all our hard work, there was a barbecue and lots of cold drinks waiting for us!

A few weeks ago, I would NEVER have imagined I could ever be brave enough to go white water rafting, but I had an amazing time and would love to do it again!