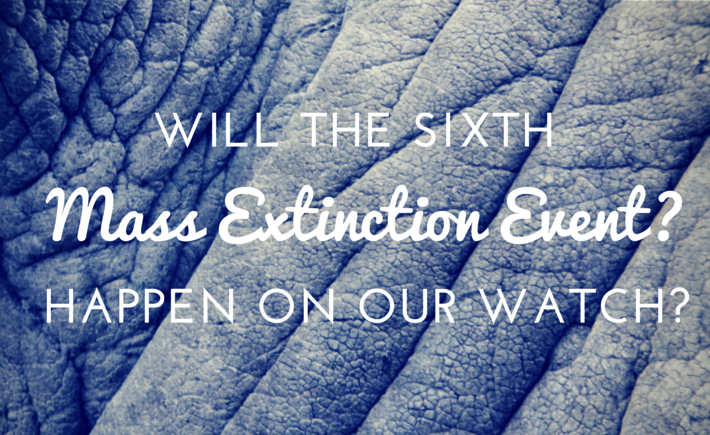 The very first life on Earth evolved over 3 billion years ago. Since then there have been five mass extinction events, the last of which killed off the dinosaurs. Some scientists now believe that we are on the verge of a sixth event. But what causes these mass extinctions and what can we do?

What does Extinction Mean?

When there are no more individuals of a particular species left alive in the world, that species has become extinct. There will never be any more. Many species still have a few individuals alive but in captivity; this is known as being extinct in the wild. A good example of this is  the northern white rhino, which was declared extinct by the International Union for Conservation of Nature (IUCN) in 2011.

Although there still four animals left, only one is male and they all live in captivity, scattered across the world. Even if they were to be brought together they wouldn’t be able to breed enough to save their species.

There are many reasons that a species may become extinct. These include climate change such as ice ages or global warming, loss of food supply, loss of habitat and competition with other species. These days humans are usually the reason for an extinction, often because we hunt the species until they’re all dead (like the dodo) or because we destroy their habitat through building, farming or pollution.

What is a Mass Extinction?

A mass extinction is where a significant number of species become extinct during the same period of time. The five extinction events we know about saw more than half the species on Earth die out. The worst one was the Permian-Triassic extinction, which occurred around 250 million years ago; during this event more than 95% of the Earth’s species disappeared. The fifth mass extinction happened roughly 65 million years ago and killed off the dinosaurs among many other species.

Is the Sixth Mass Extinction Coming?

Scientists and conservationists have long suspected that human activity could be triggering a mass extinction event. A recent study headed by Gerado Caballos of the Universidad Autónoma de México, and Paul Ehrlich of the Stanford Woods Institute for the Environment, seems to confirm that idea. In order to prevent accusations of crying wolf or over-estimating the problem they decided to only look at vertebrates, and to assume that the usual extinction rate was higher than most scientists think.

They also only considered species that have been confirmed as being extinct or are very likely to have happened in the wild. These conditions meant that if anything, the results were likely to under-estimate the scale of extinctions.

According to the criteria set by the team, 9 species should have become extinct since the year 1900. Instead they found that 477 species have died out in that time – that’s 50 times as many. And as the research team pointed out, “We emphasize that our calculations very likely underestimate the severity of the extinction crisis”. In other words, it looks as though this may be the best case scenario; we are seeing the start of another mass extinction event.

What Can We Do?

While some scientists disagree with the scale of the team’s findings, very few would disagree that life on Earth is facing a major crisis. The IUCN estimates that around 41% of amphibian species are at risk of extinction, along with 26% of mammal species. But the good news is that there are things that we can do to help.

Is There Still Hope?

Yes, absolutely. These kinds of studies are important because they help us to realise just how much we affect the natural world, and what we can do to help. There are over 22,000 species currently at risk of extinction and we can make a difference to their future.

Jump! Mag founder Lynn Schreiber visited the Ol Pejeta Conservatory in Kenya in 2012, and found out about the work they are doing. The last of the Northern White Rhinos live there – under 24 hour guard, to protect them from poachers. You can find out more about what the Ol Pejeta conservatory are doing on their website, and their current fundraising project to attempt to ‘make a rhino‘ by developing IVF techniques to breed rhinos.