Observations of Halley’s comet have been recorded since 240 BCE, but it was Edmond Halley (pronounced HAL-ee or HAY-lee) who first realised that the comet was returning to Earth periodically and must, therefore, be orbiting the same star that we do.

Until Halley’s calculations in 1705 it was believed that comets merely passed through our solar system; using his friend Isaac Newton’s new laws of gravity and motion he worked out that the comet appeared every 75-76 years. It still does – it was last visible from Earth in 1986 and will next be seen in 2061.

What does the Meteor Shower have to do with the Comet?

Although we won’t see Halley’s comet again for 45 years, its presence is still felt. Every October Earth passes through debris left behind when the comet’s surface melts; as the dust and particles come into contact with our atmosphere at speeds of up to 145,000 kilometres per hour they burn up. This is known as a meteor shower or shooting stars.

Why are They Called the Orionids? 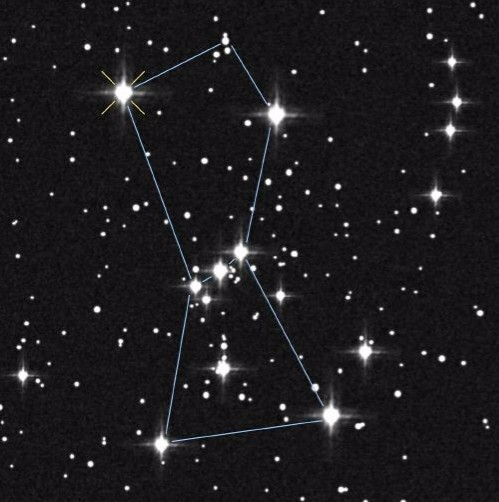 The constellation Orion, named after the hunter from Greek mythology. The three stars in the centre are known as Orion’s belt. (Image: NASA).

How Can We See Them?

This year the Orionids are visible from the 4th October to the 14th November, but they’re at their brightest and most frequent on the 21st and 22nd October between midnight and dawn. You’ll need to be outside so wrap up warmly, and find a spot that doesn’t have much light pollution – a hilltop or the middle of a park are usually good spots. Look towards the southeastern part of the sky where Orion is, and you could see up to 20 meteors per hour.

Still not sure what to look for? Check out these videos:

This one has time stamps that you can click.

Sam has also written about the differences between asteroids, comets and meteors