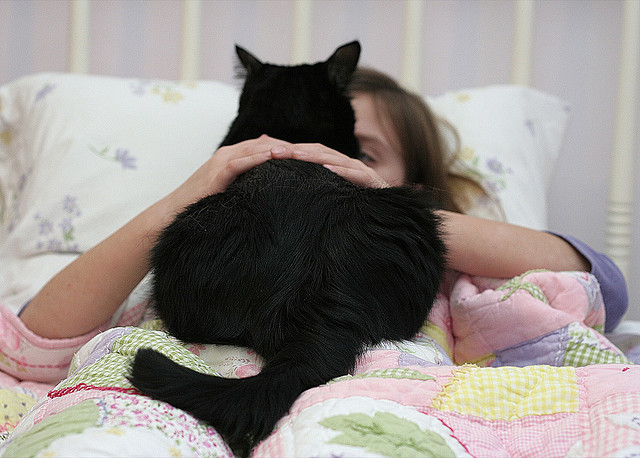 Did you have an imaginary friend when you were growing up? If you did (or perhaps still do), you are not alone. Previously thought to be unusual, it is now known to be quite common.

Kait is 15 years old. Her childhood was shared with Various Monster Pets.

I can honestly say that when I was little, I had a very creative mind. I would make up stories for my Barbie dolls and cat toys. Later I would explain the plot to my mother and then retell my grandmother everything. But my favourite imagination memories were my Various Monster Pets.

The first Monster Pet that I can remember was my dragon when we lived in Canada. I took him everywhere. To the park, to kindergarten, dance class, grocery shopping… My friends and I, who also had their own imaginary friends, would play for hours. I think my mother got a bit fed up with him. I remember that my dragon was small and green. He had red spikes going from the top of spine to the tip of his tail and a shiny, light pink belly.

My mother, my dragon and I had an agreement when we went grocery shopping. He would wait outside, tied to a post or a bike rail, while I tried to persuade my mom to buy me candy. This was to stop him from eating all the meat and the biscuits. We agreed that this was necessary. I remember this one time that we went grocery shopping and when we came out, I forgot all about my dragon. We were halfway home before I realised this, and, being four, I started to cry. So we had to walk back to the store so I could collect him. My mother was not impressed, and as she was carrying all the heavy bags, I can only begin to appreciate what she endured to keep me and my dragon happy, now that I’m older. The long, repetitive stories and having to talk to a dragon she couldn’t see.

When my mother decided to move to the U.K, I thought it best to leave my dragon behind. This was so he could protect the other kindergarden kids. Also he wasn’t allowed on the plane, which my mother had to point out. When we got to the new house, I missed my dragon, so I decided that the cupboard door that kept the hoover and the cleaning detergents, was actually a Tardis so my dragon could come vist us. (I had seen various Doctor Who episodes by this point.)

I also started watching Buffy the Vampire Slayer and this is how Spike the Vampire came to live in the same cupboard and was my new Monster Pet. I changed the cupboard door from door to Tardis to Portal. This was because when I wanted to see Spike, I opened the door and there would be a long corridor with various doors  and this is where Spike lived.

Spike wasn’t allowed out the house because my seven year old self was certain that  I was the only person who could tame him and I was also a little worried that he would eat my friends. Which, come to think of it, is not unreasonable. Spike was my friend, my protector and my mother also had to live with a Vampire in her cupboard. She used to have to get an extra cup full of ‘blood’, which was actually Ribena, for another Monster Pet that she couldn’t see, sometimes dealt with humor, other times with annoyance.

Even when I was little, I was not scared of small things, like spiders and insects. Perhaps my mind dealt with fear by conjuring a ‘scary’ monster who was also mixed with respect for others. (A result of my belief in fairytale endings and stubborn tenacity that I could handle anything.) I think that because I was very stubborn minded, Spike was also determined and fierce. Nowadays I try to see both sides to an argument; perhaps this perception was taking root as a small child. I would try to see my mother’s side to an argument by becoming my mother and Spike would become me for a story; though more action packed and not as trivial for my creative mind.

The summer I was eight, I started reading the Harry Potter books. My favourite was the second; The Chamber of Secrets. Unfortunately I also got a little bit scared as I believed that there was a giant snake down the toilet. (The sink being far too small of course.) She would slither in the walls, the pipes being too small as well, hissing and eyeing my cats as tasty food. But at night, I refused to flush the toilet, insisting that that this was what brought the Basilisk into the house. I frequently got in trouble for this and my mother had to put up with another Monster Pet. (But I never told her that this was why until much later.)

A year later, I was free of the Basilisk. (Having realised that it was Voldemort who controlled the snake and he only wanted to kill Harry Potter – which made me suspicious that there was a wizard next door.) Though she became my new friendly Monster Pet, she was my sleeping nightmare but during the day there was another monster; a horrible girl at school. While many of my friends dealt with her by crying to teachers and parents, I’m considering the possibility that perhaps my way of dealing with terribleness is to create a personal monster, one who terrorised me in the privacy of my new home. The girl was not as scary once the Basilisk came to be, and she became my new Monster Pet when the girl left the school.

But there was still one problem left.

The Vampires on the stairs and the Bed monster who wanted to eat me. As hard as I try, I have no recollection of how these Monster Pets came to be. It’s difficult to pull the memories as that was when my real life was beginning to be altered with a new father and a sibling on the way. I can only remember being very scared of these laughing Monsters. They would come out at night with red, glowing eyes and would sit on the stairs as I ran from the bathroom to my bed. However once I was past the the hall and the stairs there was still the Bed Monster to overcome.

I have a bunk bed, so I had to climb the ladder. Being a small person, this was a  very big ladder to me, and chasing away the Bed Monster at the same time was not easy. Once I was in the safety of my own bed, I would kick out my feet, to make sure he didn’t follow, and then burrow under the covers with my cat who would who would purr me to sleep. My cat still burrows under the covers with me, purring us to sleep. This was, and still is, my salvation after a hard day.

It frustrates me to realise that I have no recollection of when they vanished, leaving me alone. I con only tell you that I was very much relieved to be rid of these not-so-nice Monster Pets. When I was ten, my sister was born and my Monster Pets disappeared, my childhood fading behind me.

Thinking back on it now, I still wonder how I got my Monster Pets. Though I was solitary, I had many friends and while my imagination is slightly extreme, why I did not think of fairies, rainbows and unicorns is uncertain to me.

My sister, who is five now, has her own imaginary friend; Sana, who is human. My sister is loud, clings to people and is the exact opposite of me when I was her age. She is a little violent now and again, while I was very ill tempered. Though I am not violent, and except for the odd occasion, I am not ill tempred any more. Perhaps this was my own way of dealing with the darker side of our nature. Perhaps the creativity of our imagination is what has made us, shaped our personality but I doubt, that as I was too young to remember, I will ever truly know how my Various Monster Pets came to be.

Did you or do you have an imaginary friend? According to Dr Karen Majors, many children do.

“They provide fun, entertainment, adventures and games. They are often good, kind and helpful friends, good at listening and always available. Some imaginary friends are not always co-operative or friendly, this however seems to make them more real and interesting to the child and sometimes helps them to express their feelings when there has been a problem”.

If you used to have an imaginary friend, how old were you when your friend left? How did your family and friends react to your pet?

If you liked this article, please click on the little <3 next to the title to let Kait know.