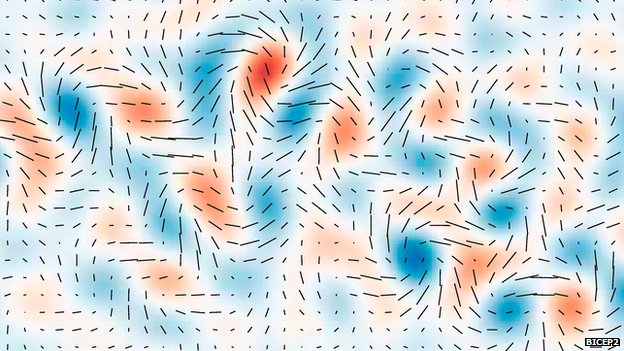 Most scientists believe that the Universe began in a Big Bang around 14 billion years ago. The entire Universe was inside a bubble thousands of times smaller than a pinhead, and was hotter and denser than anything we can imagine.

When the explosion called the Big Bang happened, the Universe as we know it was born. In a fraction of a second, the Universe grew from smaller than a single atom to larger than a galaxy. It kept on growing, and is still expanding today.

Now researchers in America think they have found traces left in the sky that prove this that the Big Bang did really happen. It takes the form of a distinctive twist in the oldest light detectable with telescopes. These twists of light are called ‘gravitational waves’ – the effect is a little bit like how waves form on the surface when you drop a big stone in a pond. However, you also have to imagine that the Big Bang formed the pond itself.

The team leading the project, known as BICEP2, has been using a telescope at the South Pole to make detailed observations of a small patch of sky. The aim was to find evidence of ‘inflation’ – the idea that the cosmos grew rapidly in its first trillionth, or trillionth of a trillionth of a second – growing from something unimaginably small to something about the size of a marble.

The leader of the team, Prof John Kovac of the Harvard-Smithsonian Center for Astrophysics said:

“This is opening a window on what we believe to be a new regime of physics – the physics of what happened in the first unbelievably tiny fraction of a second in the Universe.”

Over the coming years, scientists will work hard to investigate every aspect of this discovery. Other experiments will be carried out to see if they can replicate the findings of the American team. If this research is confirmed, it will be one of the greatest scientific discoveries of our time.

Dr Sarah Bearchell drew our attention to this video, which explains the concept of gravity and gravitational waves with the help of a towel, an apple and a ping pong ball. Check it out