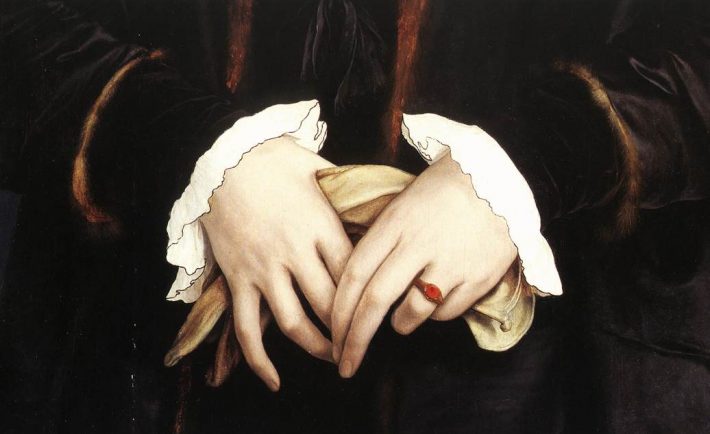 You may have heard her referred to as ‘The One Who Got Away’ from Henry VIII, but who was Christina of Denmark? Historian Lucy Allen explains.

“If I had two heads, one should be at the King of England’s disposal!”

Most of the time, when someone claims that a king or queen made a clever quip, it turns out to be made up, but the line Christina of Denmark supposedly used to reply to Henry VIII’s proposal of marriage is more likely to be true than most.

In sixteenth century Europe, Henry VIII was getting a bit of a reputation. He’d married the Spanish princess Catherine of Aragon, then shocked everyone by insisting on a divorce. Wife number two, Anne Boleyn, failed to give Henry the son he wanted, and Henry had her charged with treason and beheaded.

In 1536 Henry married Jane Seymour, and it seemed all was well. The new queen was quiet and modest, and she was soon expecting a baby. But although Jane gave birth to the longed-for baby boy, she died shortly afterwards.

Henry was, by all accounts, devastated. But he was also practical. A king, he firmly believed, needed male children to rule after him – strong sons, the more the better. So Henry was on the lookout for a fourth wife. And this time, she would strong and faithful, modest and devout – the perfect bride.

The sixteen-year-old princess of Denmark seemed like a good bet. Given Henry’s track record, it’s likely he fondly hoped that Christina’s youth would make her obedient and modest. But, although Christina was young, she was far from naïve. Her early life had taught her hard lessons.

Her father, the King of Denmark, Sweden and Norway, struggled to stay in power. When Christina was two, he lost his throne. Three years later, Christina’s mother died, aged only twenty-four. The four-year-old Christina went with her brother and sister to live in the court of their aunt, Mary of Hungary.

So Christina grew up in a court where women ruled. Her aunt Mary was a cultured woman and highly educated, and had taken an interest in politics from the early days of her marriage. After her husband died, she became regent of the Netherlands in his place. Even though she found this extremely hard, she refused to marry and allow a husband to rule in her place. It was Mary who was on hand to advise her sixteen-year-old niece when the king of England proposed marriage.

It was a difficult decision. Henry was twenty years older than Christina. He denied the authority of the Pope, the head of the Catholic Church, risking eternal damnation. Christina was a devout Catholic, and her faith was also a matter of family loyalty: her mother’s family were loyal to the Catholic Church. Christina had seen how women could make their own decisions.

She refused Henry’s proposal.  Legend has it she quipped ‘If I had two heads, one should be at the King of England’s disposal’. What’s more certain is that Henry’s own ministers let the king know there was no hope: ‘he should fix his most noble stomach’ – they meant his appetite for the marriage, not his belly! – ‘in another place’. Disappointed, Henry decided to look elsewhere. Perhaps a lucky escape for Christina?

Christina did get married, just a few years later. Oddly enough, her husband had once been engaged to be married to Anne of Cleves, the woman Henry VIII turned to when Christina refused him. Sadly, Christina’s marriage did not last long.

Like her aunt, Christina found herself widowed, with three small children to look after. And again like her aunt, she refused to play a passive role. She acted as regent for her children, and saw them grow up to rule their own lands and make happy marriages of their own.

Christina proved that – despite what her one-time suitor Henry VIII thought – a woman could rule, even in the difficult world of sixteenth-century Europe. She left her children a secure future.

If you want to see what Christina may have looked like, and hear more of her story, you can listen to this video made by the National Gallery, where you can see the portrait Henry VIII had painted of her.

Lucy Allen has always loved reading stories about women in the past. Now she works on medieval English literature and culture, and recently finished her PhD on medieval books and reading at the University of York. She is now researching medieval popular fiction and the way it represents women.