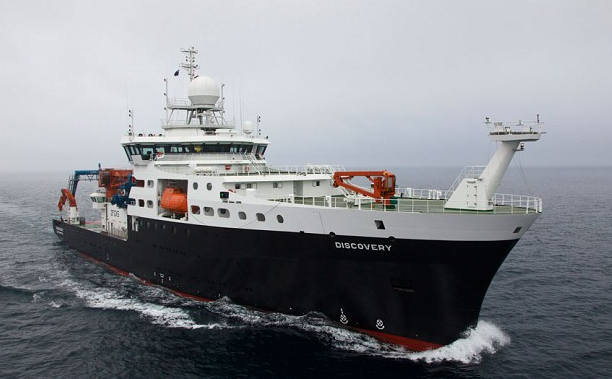 Last month the The RRS Discovery, the most advanced research ship was launched in Southampton.

At £75 million it is one of the most expensive research ships ever commissioned. It measures at  just over 100 metres long, with seven main laboratories and a bridge like the Starship Enterprise! It has just begun expeditions around the British Isles, currently examining the UK’s continental shelf, a band of sea floor around 50m-100m deep.

“These shelves are really very important,” says Dr Sanders from the National Oceanography Centre in Southampton. “There is a lot going on in the shelf seas and we need to understand how they work so we can safeguard their future.”

So what exactly is a research ship?

A research ship is designed and equipped to carry out research at sea, often designed so that they can travel through ice-covered waters.

“The biggest difference between this and an ordinary ship is that we have been built to support the UK’s scientific work around the world,” says Captain Antonio Gatti. “We are full top to bottom with scientific equipment.”

If experiments are needed at different ocean depths, at sea level or on the sea floor, the lab will be full of electronic instruments ready to be bolted to anchors or other equipment.  If the expedition involves sediment coring – collecting samples from the sea bed and below – scientists are able to extract  long columns of mud and use the labs to examine its contents.

There is also the study of ocean nutrients, such as iron. “Without any iron at all, the life forms that grow on the surface ocean simply could not exist,” says Dr Will Homoky, from the University of Oxford. “Iron is absolutely critical to the photosynthetic process, and it supports a number of other key functions in plants and animals.”

Life in the sea varies so greatly, from the enormous blue whale to the microscopic zoo plankton and we’re constantly discovering new species. It is said that we know more about Mars than we do about the ocean, which is why it’s important we have such an advanced research ship like the RRS Discovery, so that we can learn as much as possible about our planet!