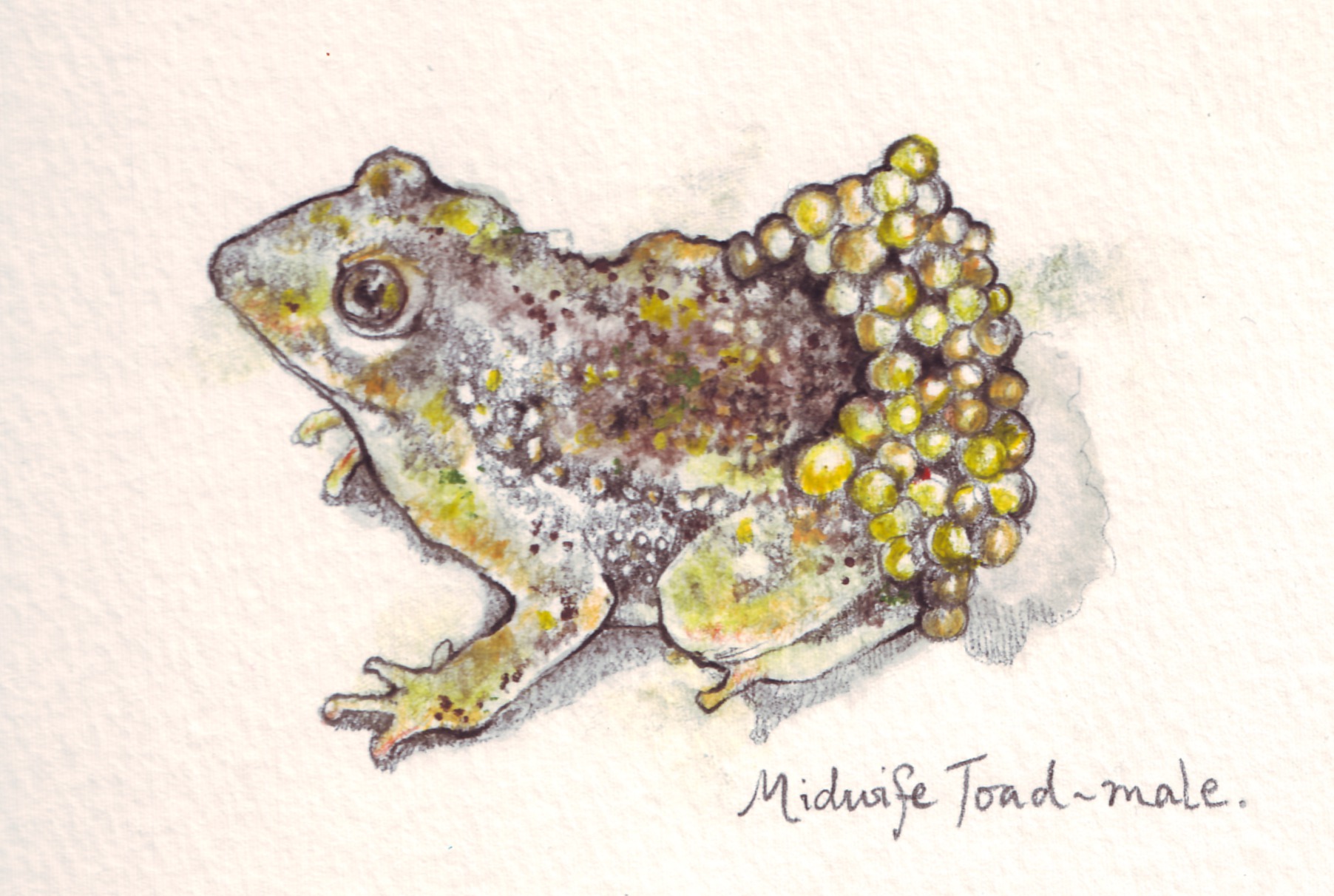 The slimy, ugly and the odd

In nature, more often than not, the male of the species scarpers once he’s mated with the female, leaving her to bring up their young alone. Not so with this curious creature, whose hands-on approach to fatherhood is second to none…

Sitting in a garden in France, many years ago, we heard a strange, sonic beeping; it didn’t come from the shadowy bats that swooped and dipped in the twilight nor was it a musical alien that had landed in a nearby field. It turned out to be the curious call of a creature called the Midwife Toad…

The Midwife toad will carry

Wrapped around its tiny legs.

Not only does the tiny male help the female to lay her eggs but also it is he, not her, who then looks after them by carrying them attached to his hind limbs. And he’s smaller than her, too! (In nature, particularly in reptiles, insects, amphibians and fish, there are many species where the males are smaller than the females)

The male can carry up to 170 eggs, if he’s carrying for more than one female – that’s a lot of kids. He certainly wouldn’t be able to move very fast with that kind of load. So how does he protect them, as well as himself, from predators? The answer is with a powerful and strong-smelling POISON, which the toad emits from the tiny warts that cover his back if he is handled or attacked. And this means that Midwife Toads don’t actually have many enemies.

And look, it’s not the mummy

But the smaller daddy toad,

Who babysits and oversees

The males work hard; they raise their legs off the ground to protect the eggs if things get too humid underfoot, and likewise, they sit in ponds or pools with the eggs attached if the climate gets too hot. What heroes!

The eggs are ready to go into a pond or pool about three to six weeks after being fertilised and there they hatch-out into tadpoles.

These toads are hard to spot because they are extremely well camouflaged, blending well into their environment; earth-coloured, dark grey or green with pale bellies, small and plump (an average adult is just 40mm long) with a warty back. They live underground, particularly in high summer, to avoid the hot sun; in small holes they have either dug themselves, or in abandoned holes made by other small creatures. The toads come out to sing to one another as night falls and the air cools.

Who bravely guards its young,

Is belching out a lullaby

In each melodious song…

In the twenty-three years we’ve been visiting the same place in France, we’ve enjoyed the sonic beeping of the Midwife Toads in the early evening, but never once have we seen one!

CURIOUS CREATURE SUPER-POWER: This ultimate dude dad assists in childbirth (well, egg-birth), takes all responsibility for its young (up to 170) and deposits them in the Big Pond only when they’re ready to go it alone as tadpoles.

Oh yes, and they can hold a tune, too! (as can the females)

HABITAT: terrestrial, on flat ground generally within 100 meters of water. These toads co-exist happily with man, living in gardens, parks, cemeteries and buildings across Western Europe and including the UK (although they generally prefer a warmer climate). They are VERY adaptable.

PRETATORS: not many, due to the smelly poison their warts produce.

So do not underestimate

The odd and ugly crew;

All creatures have a place on earth,

Including me and you!

Amphibians – cold-blooded creatures, such as frogs, toads and newts

Co-exist – live in harmony with

Sonic – having a speed about equal to that of sound

Terrestrial – land (rather than water)

Look out for the next CURIOUS CREATURE in JUMP! MAG soon…

Gabby Dawnay is a writer, poet and artist. She is a regular contributor to Okido magazine, a fab arts and science magazine for kids. In February 2014, Gabby’s first picture book  called A Possum’s Tail – a collaboration with illustrator Alex Barrow – will be published, followed by a second book about London in July 2014. Both are by Tate Publishing.  As well as writing children’s books and for children’s television, she does both private and commercial art commissions, which you can view on her blog.