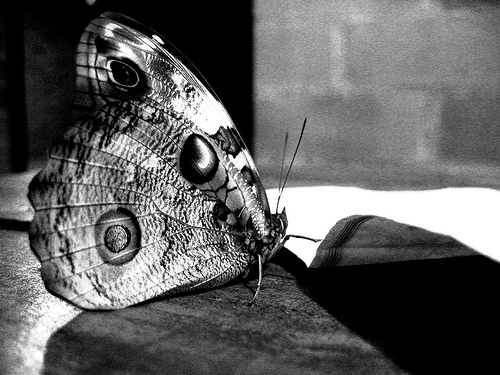 Millie explained recently what etymology means, and fitting to this week’s theme of Jump! Into Biology, we are are asking ‘where did the word butterfly come from?’.

Who hasn’t seen a butterfly flitting by and  enjoyed seeing the flutter of its wings? But have you ever considered why it came to be called “butterfly”? Perhaps you have wondered whether there used to be a large number of yellow, butter-coloured butterflies who gave their name to the whole species?

Well, there is a nice little story attached to the name of the butterfly. In the past, there was a general belief that butterflies ate milk and butter. This probably came about because of the way that flies hover over any food at all that’s left out, and butterflies may have been seen hovering over uncovered pails of milk and butter. Not only that, but this belief developed to encompass the idea that butterflies were either sent out by witches to steal butter, or were in fact, witches themselves, disguised as butterflies. Quite why the witches were out to steal the butter, we don’t know!

However, nice though the story is, we can’t be sure that it is true. What we can be sure of is where the word came from, and that is from Middle English buterflie or boterflye, which in turn came from Old English butorfleoge, which may have been formed by putting together butor, which came from beaten (unsurprisingly, this meant “to beat”) and fleoge; “fly”.

Another explanation suggested by etymologists is that it may have been *flybutter, and for some reason this was inverted, or turned around and became “butterfly”. If this theory is true, then the word may ultimately be related to Latin papilio. One sound that has often beeen changed over the centuries in language is a p developing into a f sound. However, it should be noted that there are no records of this form.

Let’s have a brief look at a few words for butterfly in other languages. In French it is papillon, while in Italian we find farfalla, both related to the Latin. Spanish gives us mariposa; and borboleta comes from Portuguese. Russian has a nice little word; babochka (бабочка). My personal favourite is in Modern Greek, where the word is petalouda (πεταλούδα), which comes from the word “petal”, perhaps from the shape of the wings.

Find out more about butterflies on this great website, where you can find answers to such questions as:

How many kinds of butterfly are there?

Worldwide, there are approximately 28,000 species. There are about 725 species in the USA and Canada. About 2,000 species have been found in Mexico. About 80% of all species are in the tropics. The United Kingdom has 58 species of butterfly and 2,000 species of moth.

What are the largest and smallest butterflies?

Queen Alexandra’s Birdwing (Ornithoptera alexandrae), with a wing span of 11-1/8 inches (280 mm), is found only in the rain forest of New Guinea. Destruction of its habitat is threatening this beautiful creature with extinction.

The smallest butterfly, the Pygmy Blue (Brephidium exilis), is found in the southern United States. Its wingspan is 1/2 inch (15 mm).

Now you know where the word butterfly came from, you can find places to visit – butterfly exhibits and gardens around the world – here just a small selection, check out the butterfly website for many more suggestions (and make sure you check opening times before you set out!)

Butterfly World in Florida, US