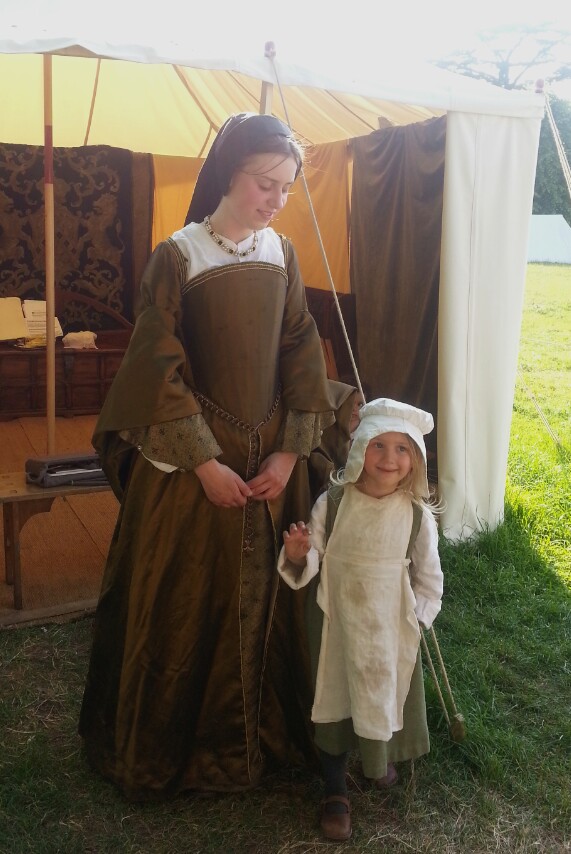 You will all know what a ‘servant’ is, I am sure  – Perhaps your Mum says that sometimes when you ask her to do too much for you ‘Do you think I am your servant?’ 🙂

Do you know we mean when we say ‘the gentry’? According to this website

The gentry were the people who were knights, squires, gentlemen and gentlewoman whose fortunes were great that they did not have to work with their hands for a living. Their numbers grew rapidly and became the most important class during Elizabethan time. They could start as a knight and through generations and marriages, they could gradually build a wealth and title. Most of the important people of this time came from this class.

Back in Tudor times (between 1485 and 1603), a person couldn’t choose to be born into the gentry. Today groups of people all over the world get together to reenact various periods of history, including the Tudor period.

Alison has been on both sides of the gentry/servant divide and tells us all about reenactments, making your own clothes and living like a Tudor girl, at least for a weekend.

Four years ago my family and I went to visit Kentwell Hall’s Tudor recreation. Some friends of ours do it, and have done it for a long time now.

We really enjoyed it and decided we’d have a go ourselves. So the next year we signed up and joined it.

I don’t really like sewing, so doing so much hand sewing was really hard. But there are so many people to help you and encourage you that it’s not as hard as I first thought.

Sometimes the clothes are hard to wear. They’re so different from what we’re used to. But I do have some friends who choose to stay in they’re costume after hours.

All those people who help with sewing, help with speech. They’re amazing, they jump in and save you when you stumble, when you say ok when you really shouldn’t. It’s a really nice atmosphere. People talk to each other, less texting and phones and internet. It sounds horrible, but it’s so calm and lovely. Less rushing around and more just going with the flow.

This year I was gentry for two days. I’m normally a normal person so it was really interesting to try being someone different. I was only going to do it for one day, but my friend was really lonely being the only gentry child. So I kept her company.

I played Mistress Bridget Devere, the visiting household to the Cloptons (who owned Kentwell Hall) here’s a picture… This costume is quite different to the normal ones. One downside being you can’t move your arms very far. So when I was eating my napkin kept falling off my shoulder, but I couldn’t bend to pick it up, so I had to call for a servant. Which was a very odd experience as I know all of them outside of them being “servants” to me…

I love it, it’s the best thing about summer. I re-enact here, and Kentwell Hall. But there are re-enactments all over the place. There were recently some american re-enactors who came to see what Kentwell is all about.

Even if you don’t want to reenact visiting is amazing, and so interesting.

I’m a home educated teenager who loves, sports, writing and music. I write my own blog, Just being me, and have done consistently for about three years.

Find a re-enactment group in your area

About Alison: I’m a home educated teenager who loves, sports, writing and music. I write my own blog, Just being me, and have done consistently for about three years.