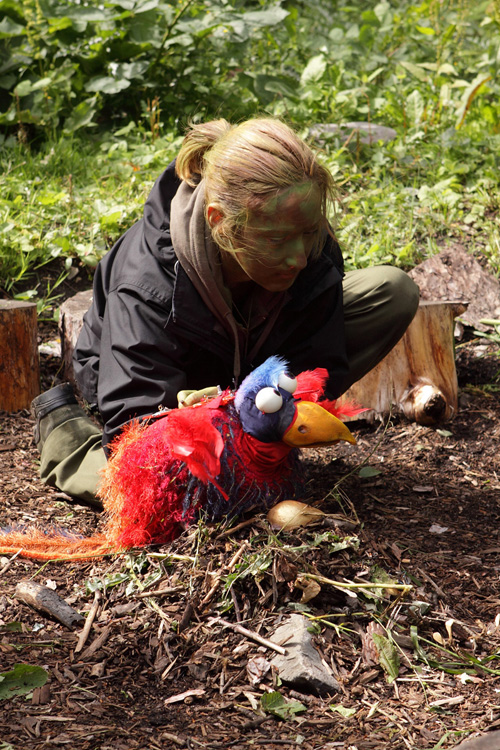 Beka is a performer and puppeteer and runs her own street theatre company, Frolicked.  She works part time as a Project Officer for a music education charity to support her theatre company. Our contributor Katie Scott interviewed her.

1. When you were a child what did you want to do when you grew-up?

I really wanted to be a stop motion animator when I was younger – I really loved Nick Park (and all of his work, from ‘Creature Comforts’ onwards). I also loved Warner Brothers cartoons and fancied myself as a cartoonist at one point too. Sadly, I also knew myself well enough to know I’d never have the patience for either. Puppetry wasn’t something that presented itself as a viable alternative until I went to university, even though I’d also loved and been influenced by Jim Henson and his feature films.

2. Did you enjoy your time at School?

Honestly…? For the most part early on, no! I ended up despising junior school because I was bullied. Not very badly, but enough to be keen to get away from the perpetrators. I was lucky in the end – I was the only person in my year at junior school to pass the exam to get to a particular grammar school, so I escaped them all. I started to enjoy school more and more after that (being around people who were just as clever – and even more so – than me) and as I got older, I became increasingly more confident to be myself. By the time I was doing my A Levels, I’d become the ‘arty’, alternative one. No more bullying – just an acceptance that you’re a certain type of person, with specific interests, which was so much nicer.

3. What did you do once you left School?

I studied an Art and Design Foundation course at Manchester Metropolitan Uni and went on to complete a degree in Theatre Design at Nottingham Trent. I loved both courses, but by the end of my 3rd year in Nottingham (and after getting a degree), I just wanted to come back to Yorkshire. So I did!

4. When did you first encounter puppeteering?

In my second year at university, I made my first, larger scale glove puppet. I completely fell in love with the entire making process and even though I never thought I’d become a performer, I knew that making puppets was what I wanted to do from then on. My final degree show involved making and performing a puppet show and after I left university, I was lucky enough to take part in IOU Theatre’s residency scheme  to explore my work with puppets in more depth. I met another street theatre company, the Whalley Range All Stars, during my time at IOU and I have worked for WRAS as both a maker and eventually a performer since 2006.

5. What made you want to start up your own business?

After trying my hand at performing with WRAS, I fell in love all over again with puppetry as an art form. I really loved the combination of puppetry and street theatre, and became brave enough to make my own work and perform it to the masses. I managed to get a few of my own paid gigs, with my very own unique style of puppet characters, and haven’t really looked back.

I knew early on that if I wanted to make it as a puppeteer and performer that I’d have to create work opportunities for myself, especially when I had the desire to stay here rather than relocating to somewhere like Bristol or London. I knew I’d have less opportunities open to me here, but I’m inspired by my surroundings much more and feel quite strongly that I’d make less work if I were somewhere I wasn’t completely in love with. I also had a strong urge to make my own work and realise my own ideas – I didn’t really want to work for other people all the time. I enjoy making and performing shows that aren’t my own, but there’s something really special about making your own work and performing it successfully in public. There’s no greater buzz for someone like me.

6. Did you face any barriers to finding your vocation and starting up your business?

Sure, lots! Firstly, I don’t do this work on a full time basis, because I don’t earn enough money to pay the bills just by performing and making. I know I will in time, but it’s hard to not be disheartened by the fact that it takes so long to build a reputation for yourself and for your company. Running a company also takes up a huge amount of your free time. My friends all think that I’m brave for shooting for my dreams, but the reality is that it is hard work to keep motivated and to keep going. You also have to take on much more responsibility and become good at doing lots of different roles at the same time (making, performing, directing, managing, marketing, administrating, etc, etc). It’s hard at times and it’s frustrating, but the best advice I could give someone wanting to start out on their own is to just keep going, no matter what. If you’ve seen ‘Finding Nemo’, you’ll remember my favourite phrase from the film: “just keep swimming, swimming, swimming”. It’s so true! If you’re doing something that you love doing, don’t ever give up.

I definitely will be running my company full time and I’ll be travelling to more places in the UK and abroad. It’s not a hope anymore for me – it’s a goal, and it’s an achievable one. I’m already getting a reputation for producing good work, and I’m already touring to places like Ireland, Scotland, France and Holland (sometimes with my own work, sometimes as part of another company).

My hope is that I’ll still want to produce more ambitious work and that I’ll be making work that is seen and experienced by many more people. I’d love to make a bigger show for a big, old building, or a woodland, or a beach, or an old mill – some eerie, magical place somewhere – and fill the space with a really engaging story and creatures and characters around every corner… to bring the space to life.

Don’t worry what other people think about you and don’t give up who you are for anything or anyone… because look where it can get you!

Being a bit of nerdy kid (who was always into unusual things that weren’t particularly mainstream) was hard. Other kids can be very cruel to those who are a bit more unusual and part of my defensive mechanism was to escape into my imagination. But all that interest in weird and wonderful things, and that probably slightly more developed imagination, has made me the person I am today – and I’ve been so lucky so far. I want to tell that 12 year old to worry less and hang on in there, because I’ve had some amazing experiences and made some wonderful connections with people all over the UK and in Europe. I’ve been to places I would never have visited and I’ve got the craziest and best set of funny, supportive and exciting friends. I get to play with puppets and get paid to entertain people with my antics… and I wouldn’t swap that for anything