Ruth is a professional archaeologist. She spends most of her time below ground, running archaeological excavations on busy construction sites. If you have ever wondered how to become an archaeologist, read on!

My interest in archaeology started with Jurassic Park. I’m not entirely sure how long it took me to realise that palaeontologists analyse dinosaur bones whereas archaeologists study the human past, but I got there in the end! Anyway, by the age of 7, I had decided that I wanted to be an archaeologist. 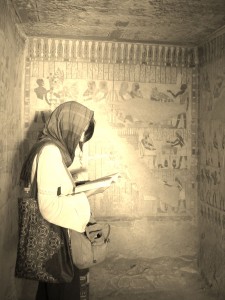 How I imagined life as an archaeologist (aged 7)

Being unable to spell archaeology didn’t hold me back. I learnt the Horrible Histories series by heart, watched Indiana Jones and spent family holidays visiting museums and archaeological sites; although, if I’m honest, I probably spent most of my time in the gift shop! At primary school I was very shy, and the idea of speaking out in class terrified me; but in history lessons nothing could stop my hand from shooting up to answer questions. Even now, almost 20 years later, I still remember how proud I felt when my teacher said that he could imagine me as an archaeologist.

My enthusiasm for archaeology waned when I went to secondary school. I didn’t enjoy the way my GCSE history course was taught, we spent hours writing as the teacher dictated the textbook to us; I felt like I had gone back 150 years and was learning by rote in a Victorian classroom! I still worked hard but that spark for history had gone, and I decided not to study it further. Instead, I chose the subjects that I enjoyed the most to study at AS/A2 level: art, biology, chemistry and English literature. At the back of my mind I knew that as archaeology involved both arts and sciences, a mixture of these subjects would be useful; but alternative career choices kept popping into my muddled head.

Fortunately archaeology came to my rescue. Whilst I was doing my AS levels, my granddad bumped into an old friend in town, who happened to be a real-life, professional archaeologist! Of course I could visit the site he was working on for a couple of days, in fact, I could give the finds specialist a hand. Tucked up in a portacabin I labelled pottery sherds with a fine nib and black India ink. Torrential rain hammered on the metal roof, and the ceramic dust and dried mud I was inhaling turned my snot black, but I had found my calling! This revelation was slightly spoiled by the finds specialist and the site supervisor (a married couple) telling me that I shouldn’t even think about becoming an archaeologist: ‘the pay is awful’, ‘there’s no job security’ and most worryingly, ‘last week tourists mistook me for a tramp!’

It’s all Greek to me! Classical archaeology 1 (me and column) 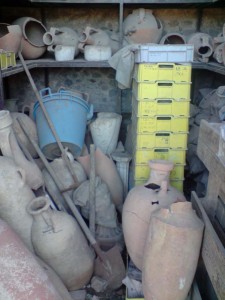 Obviously, I ignored all their advice and successfully applied to study archaeology at university. At first my degree was in Classical (Roman and Ancient Greek) archaeology, which also required me to learn a Classical language. Unfortunately my enthusiasm for the Ancient Greek tongue didn’t mask how absolutely abysmal I was at it. After a year of mangling the language, I admitted defeat and switched to a different degree.   I’ve often wondered if the faculty tutor realised how little I knew about the Saxons and Vikings when he allowed me to convert to a degree in early medieval archaeology. As a teenager I thought that this time after the decline of the Roman empire was referred to as the ‘dark-ages’ because they didn’t have any candle wax; I can now assure you that this was definitely not the case! 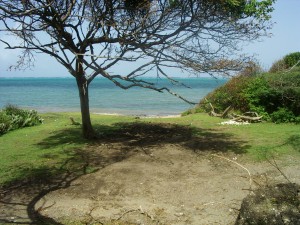 Incredible view from the site 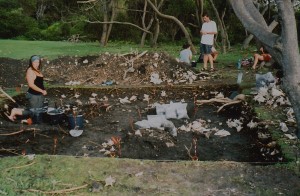 Our trench; it really hurt when we accidentally kneeled on those white conch shells! 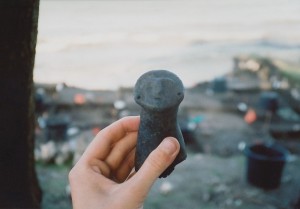 My first Amerindian find, a pestle; look for the human face (with pierced ears) on the handle.

A very high section. All the darker coloured earth is archaeology, and the red flags show where interesting artefacts had been found.

As part of my degree I had to complete three months’ of fieldwork, most of which was paid for by my university. Who would have guessed that digging up an Amerindian rubbish dump, next to a beach, on a small island in the Eastern Caribbean was relevant to medieval Britain? 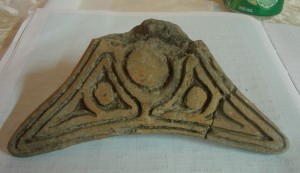 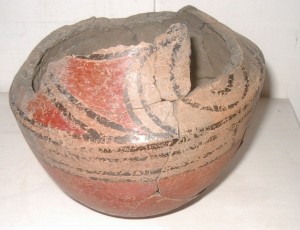 An Amerindian decorated pot, reconstructed by one of our team

Cheered by my idyllic summer, I finished my final year of university. A month or so before I graduated, one of my friends mentioned that he had got a job with a commercial archaeology company. Nervously, I submitted my own brand-new CV.   And that was the start of an awfully muddy adventure…..