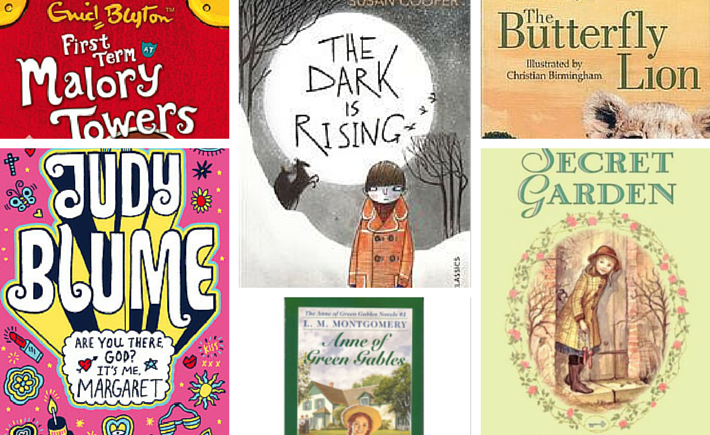 A book can transport the reader back in time. It is hard to imagine a time when we weren’t surrounded by modern technology, but if you read Anne of Green Gables, written by Lucy Maud Montgomery in 1908, suddenly you are bouncing alongside Matthew and Anne in their horse-drawn buggy. Anne and her ‘bosom friend’  Diana didn’t have Instagram to keep in touch, but you will recognise the friendship and fun they have, similar to the connection you have with your BFF!

We’ve selected our 6 favourite Classic Books for Tweens. Whittling it down to just 6 books was almost impossible, so do let us know which ones you think we really should have included! One of the great things about reading Classic Books, is that you can download most of them free – or have a look through your parents’ bookshelves, or a charity shop if you prefer to read a printed book. We’ve linked to the Kindle edition of the books, and chosen the free edition when possible.

Anne is an orphan sent to the home of Marilla Cuthbert and her brother Matthew in the fictional village of Avonlea. The Cuthberts requested a boy to help Matthew run the farm, but a mistake at the orphanage leads to the talkative, creative redhead Anne Shirley being sent instead. Anne’s adventures (and misadventures) and the cast of fascinating characters make this a fun laugh-out-loud read. There are numerous sequels, and the story has been adapted for film and TV.

The Dark is Rising Series

Very different to the gentle world of Avonlea, this fantasy series depicts a struggle between forces of good and evil, called the Light and the Dark. Over Sea Under Stone is the first book in the series, and aimed at slightly younger readers than the rest of the series. The Dark is Rising introduces Will Stanton, who begins to have weird experiences on his 11th birthday, shortly before Christmas.  He learns he is one of the Old Ones, a guardian and warrior for the Light.

Are You There God, It’s Me Margaret

12 year old Margaret has just moved schools. She is coping with puberty, and the changes it brings, noticing boys for the first time, and wondering if she should follow her mother’s Christian religion, or her father’s Jewish faith. In a series of one-sided discussions with God, she works through these issues. Funny and insightful, this is a great book about a girl who just wants to be normal.

This is quite a recent book, compared to the others on our list. Written in 1996 by Michael Morpurgo, it tells the tale of a young boy called Bertie, who runs away from boarding school. He meets an old lady, who tells him a story about another Bertie who saved an orphaned lion cub in Africa.  A many-layered story of friendship, loneliness and courage.

When we meet the heroine of The Secret Garden, we don’t warm to her… and no wonder. She is rude, cruel and rather nasty to everyone around her.  10 year old Mary is sent to live with her uncle in England, after her (equally unpleasant) parents died in India. Shortly after arriving at her uncle’s home, she hears of a secret garden, which her uncle had closed up after the death of his wife. Mary determines to find the secret garden, and while doing so, begins to change for the better.

Darrell Rivers is sent off to boarding school in Cornwall, with each of the six books detailing a school year at Malory Towers. We follow Darrell’s life at the school, filled with friendship, lessons, fun and mischief. You may need to google some of the words – anyone know what a tuck box is, or a lacrosse stick?!