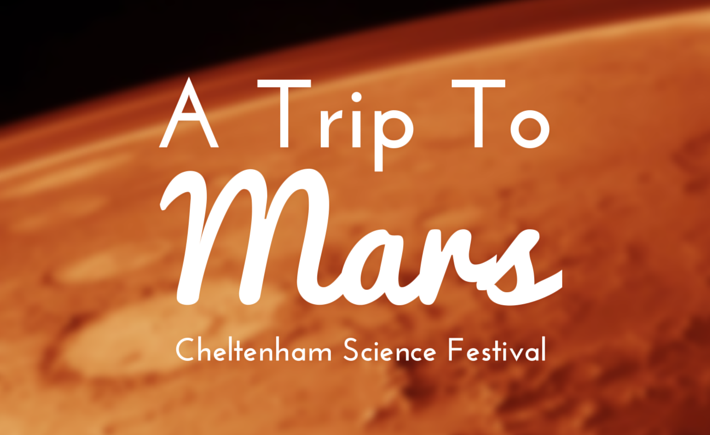 Imagine being able to catch a flight to Mars as easily as we travel to another country – that was the idea behind the Trip To Mars session I attended at the Cheltenham Science Festival. It was conducted by Dr Suze Kundu and Dr Simon Foster and presented as a pre-flight safety briefing, with both of them dressed as pilots! There were a lot of humorous moments and sci-fi references but also some great science.

Suze and Simon suggested that in the future, flights to Mars could be far quicker than they are now, and explored how some of the bigger problems could be overcome. For example, the Sun’s magnetic field deflects a significant proportion of the cosmic radiation that could be harmful to humans on Earth; as spaceships travel further away from the Earth and Sun they will have less protection because the magnetic field weakens. To combat this it’s possible that spaceships will contain or be covered with large and powerful magnets, to produce the same deflective effect. This would have the added advantage of also deflecting radiation from solar flares.

Spaceships journeying to Mars would travel at such speed that even tiny fragments of rock and dust could be damaging to the hull. To combat this, and also the heat generated when the spaceship passes through an atmosphere, Suze and Simon discussed the possibility of spaceships being coated in aerogel. This amazing material is a solid formed from silicone dioxide but is 98% air; this means that it is extremely light but also strong. Its melting point is 1,200°C (equivalent to asbestos) and it is a wonderful insulator. Because it consists of large pockets of air between thin layers of silicone dioxide, any dust or rock fragments that hit it would be slowed and stopped before they could penetrate the aerogel completely.

Suze and Simon also discussed the possibilities and problems with cryostasis. Theoretically this is when a person’s body is cooled to temperatures so low that they enter hibernation, ideal for long journeys through space. Unfortunately our technology isn’t advanced enough to do this at the moment; any attempt would result in the cells rupturing and the person dying. But in the future it will be possible, perhaps after the person’s DNA has been altered slightly so that they can produce antifreeze proteins like some species of wasps and turtles.