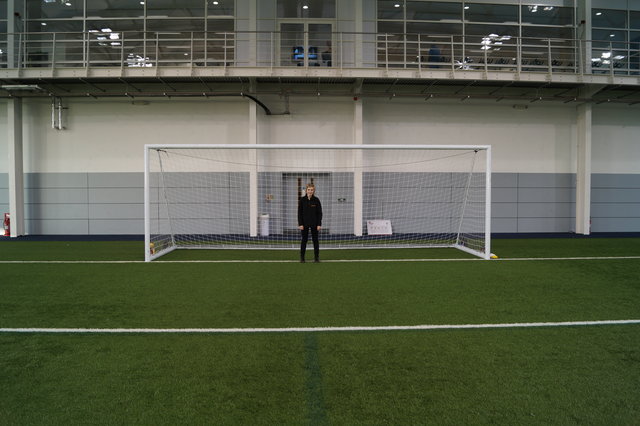 If you missed part one and two, you can catch up now!

Ailsa went to the Women’s U17 Championship thanks to the kind support of Continental UK. 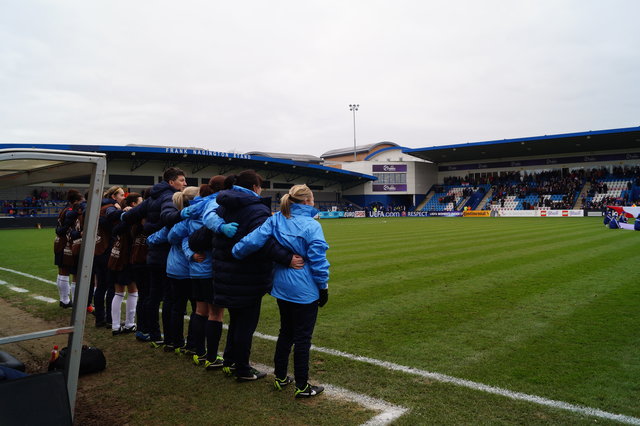 The match was at Telford Stadium so we had a 50 mile journey from St. Georges Park to get there.

It was a rather cold day to be outside but it wasn’t shown by any of the excited school children that flooded the ground, ready to watch the game. Before the match began outside the stadium, Continental Tyres were running a Conti Fan Zone. A variety of football activities were being run for the energetic children.

I had a go at measuring the speed of my kick. On my first go I fluffed it and didn’t even hit the target (that’s why I play in goal!) but on my second  go I managed to get 29mph which was quite good.

I had to do a piece to camera about what went on before the match and interviewed two Birmingham City Ladies who were taking part in the activities. 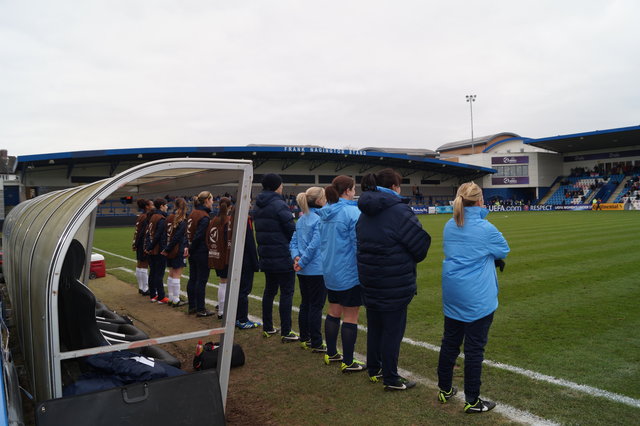 Me and my cameraman David positioned ourselves by the team dugouts, ready and waiting for kick off. When the game finally  kicked off it was a fast, exciting game.

Both teams were equal and no team was particularly dominant. The England captain, defender Leah Williamson  was a stand out player as she was clearly comfortable on the ball and lead the team with ease.

At half time it was 0-0. For the second half me and David retreated to the press box, due to the days coldness, where Simon and Dad had been watching the game and famous footballer spotting. 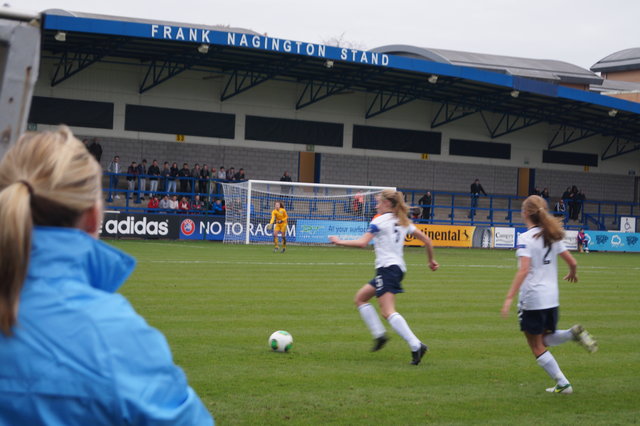 I had to do some  reporting to the camera at half time about how I thought the match was going. The second half was just as gripping and as nail-biting as the first. Unfortunately England conceded an untimely goal off a deflection. England continued to battle throughout the second half and continuously tried to win themselves back a goal, they came staggeringly close to scoring again but unluckily when the final whistle blew, Italy won 1-0.

The score didn’t reflect the game, a draw would have connoted the game more suitably.  After the game, I got the chance to ask Lois Fidler a question at the after game press conference.

Following the press conference I then  got the opportunity to interview the current England Ladies Manager, Brent Hills, who was lovely and chatty,  I still can’t believe I got the chance to interview him.

I was overwhelmed by the people I got the chance to talk to about the game. As the day came to a close it was time for us to go back to St. Georges Park after a long, jam-packed, thrilling day. 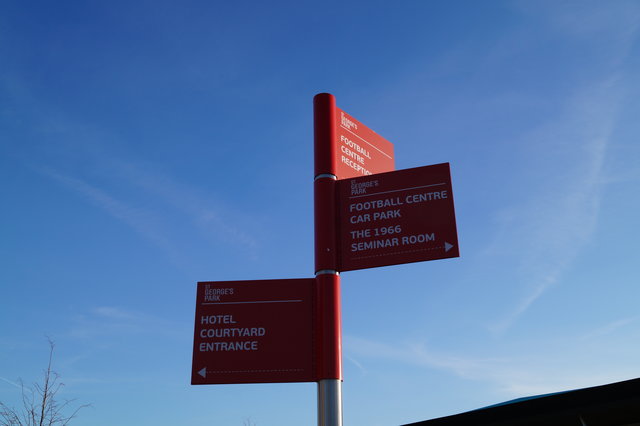 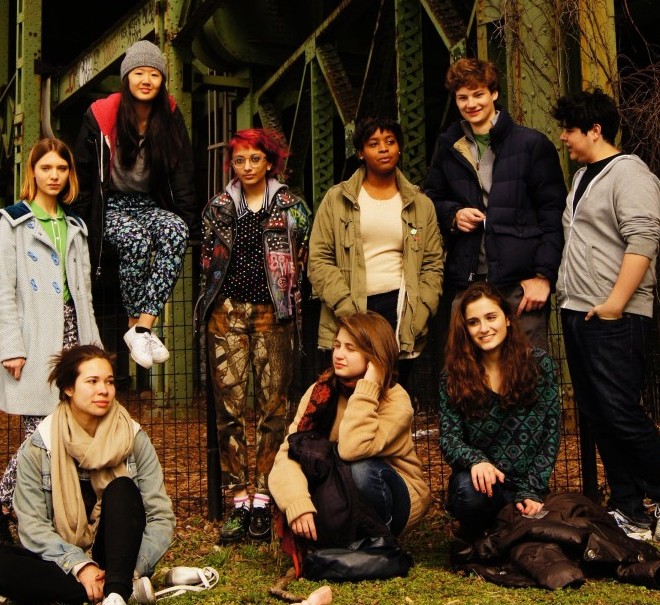 Young people find it tricky to get noticed as an artist – the art world can be intimidating. This group of young artists celebrate and exhibit their art in the Teen Art Gallery, run in New York by teens. Our Sally-Anne caught up with director Charlotte Bravin Lee to find out more. Hi my name is Taylor. I am 9 years old, I am in year 5. I live in St Ives in Cambridgeshire.  I like irish dancing, Jessie J, Tang So Do and Tuna Pasta.  When I grow up I want to be a midwife.

Our project together is called Credible Likeable Superstar Role Model.

If you don’t know already, a role model is someone you admire, whose behaviour inspires you, makes you happy. And want to achieve something as well as they have.

Ages ago me and my aunty Bryony had a look at the role models that were offered to kids like me on TV, in music, online. We found they were all very similar. Lots of them talked about fame and money, the girls all looked similar, the way they made you feel was the same, most also tried to sell you something. We started to think about a different role model who wasn’t like that. And we decided to make one come to life. As an alternative.

I chose my top 5 personality traits for a role model from a list that Bryony gave me. These were:

I then created a character that had these traits. Bryony asks me 100s of questions all the time. I am in charge. I am the manager. She then goes away and makes things come to life. It is very fun. And a bit strange.

Her name is Catherine Bennett.

She works in a Museum with the dinosaurs.

She is good at what she does.  She worked hard to get there.

Her favourite food is Tuna Pasta.

Her bedroom is light blue.

She has lots of friends, likes parties and being outdoors.

She goes to the gym everyday and practices martial arts.

Matthew is a proof reader.

Chelsea is a midwife.

To relax she lays on the sofa and watches TV.

Her favourite film is War Horse.

Her favourite TV programme is Come Dine With Me 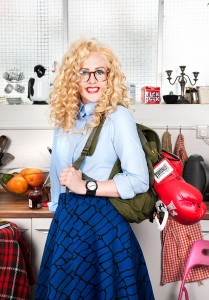 Catherine as you have seen, has shoulder length blonde curly hair

She wears glasses and a dinosaur bone necklace.

Has blue eyeshadow and red lipstick

She is quite covered up. She is quite clumsy so doesn’t wear high heels. She always has a back pack even when she is on the red carpet. She is a normal lady.

We decided that pop music was the best way to reach people my age. So CB became a pop star. My aunty played me hours and hours of music. She then gave me a sentence and made me fill in the blanks with musicians and bands.

CB sings songs like Lily Allen, written by the B52’s and produced by The Gorillaz.

I then gave Bryony and Tom (who makes the music) the things I thought CB should sing about, things that me and my friends like. Animals, Friendship, getting up and being happy.

Catherine Bennett wants you to believe that anything is possible in life. She wants you to use your imagination

And she wants to make sure no one ever feels small.

We now need to get CB famous. So we can prove that kids would like an alternative role model.

We have decided that fame means:

And one big company to offer to buy CB (so we know they are scared and want in on our good thing!)

You can help us by…

Sharing our music and telling people our story. Pass this on to all your friends, and visit the website www.catherinebennett.so

NOW. I want to introduce you to someone –

Since writing this article, Taylor and her aunt have been very busy. First they raised a ton of money to pay for a documentary to be made about their project, and they starred in their show. It was performed in theatres around UK, and then in Australia, where the response has been brilliant. This review from Herald Sun

The show flips between deliciously charming and fiercely confronting as we watch the pair dance with joy and abandon to Jessie J, enact fantasy stories, become knights-errant to fight invisible enemies, and share secrets about each other with the audience.

Taylor is a bright-eyed, innocent fawn in Kimmings’ eyes, while Taylor sees her aunt as a dinosaur with a bad back.

Kimmings in compelling and this production is joyful, self-referential, autobiographical theatre-making at its best, with a touch of feminist politics, a smattering of critical analysis of pop stardom, a huge dollop of comical storytelling and pop culture, and plenty of poignant yearning.