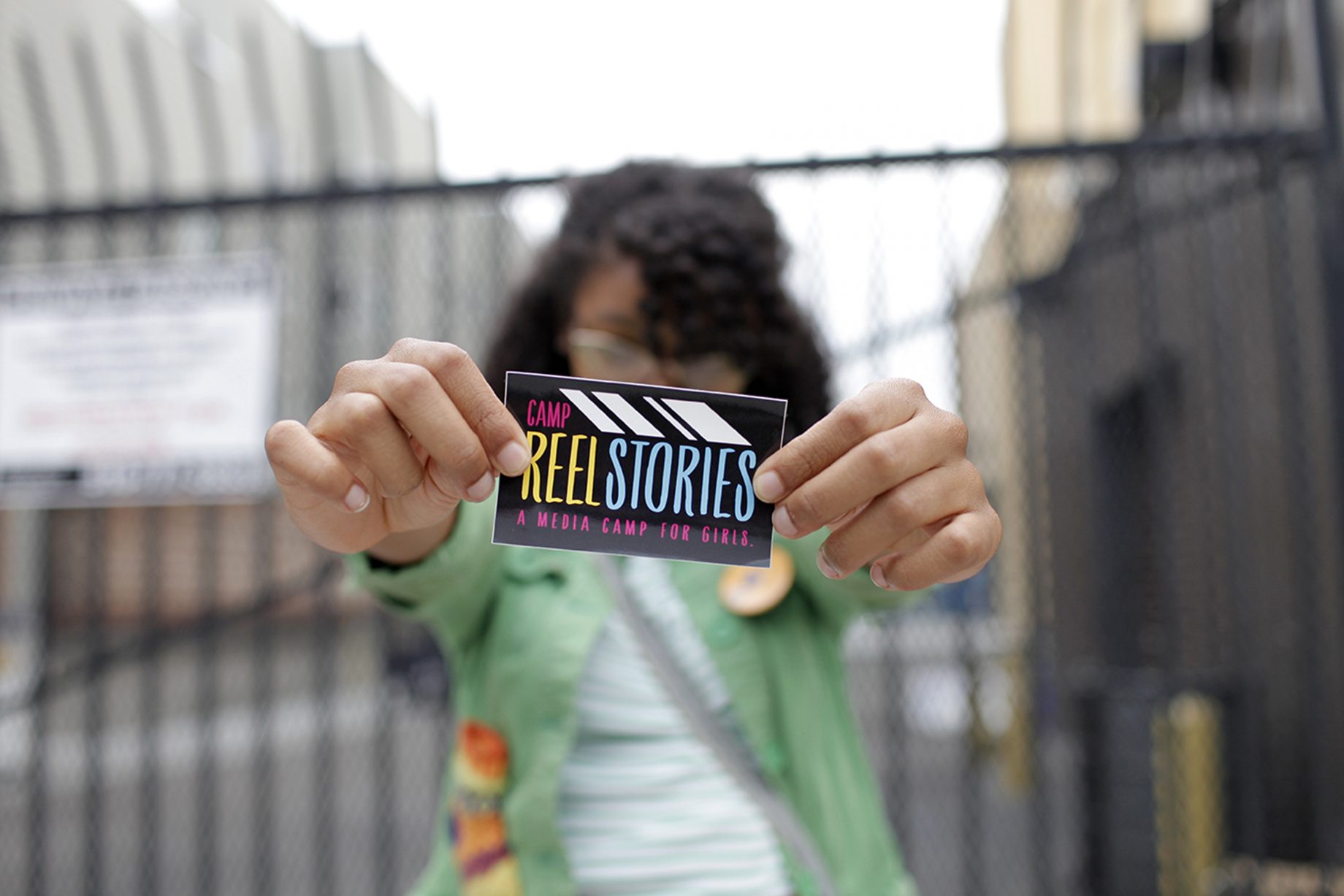 Have you ever thought about the people who make movies? Did you know that less that 20% of the main decision making positions in the media are held by women? This obviously affects the way that women and girls are portrayed on screen.

With media platforms like YouTube or Vimeo,  its easier to get friends together and write, direct, edit your own shows and distribute them for the world to see, but where do you start? How can you make a movie? One way is to take part in a Apple Camp – check the link to see if there is one in your area.

Once you have been making films for a while, you may want to learn more about how movies are made, and how to put them together. A new venture in California aims to help girls do this – on a one week camp.

Our contributor Annie May had a chat with Esther from Camp Reel to find out more.

Hi Esther, How are plans coming along for this year’s Camp Reel?

Things are going great for year 2 of Camp Reel Stories. We are so excited about the great campers, volunteers and workshop leaders we have coming. We are reorganizing things a bit so we can add more media literacy and more time to actually shoot their films, since we got requests for both. It’s a lot to pack into a week, so we want to make sure we have time for FUN too! It’s hard work to make a movie in 5 days, so we want to balance that with silliness and laughter too.

When did you first come up with the idea?

I have been thinking about creating a program for young women for several years. I had been involved with a great organization called Bay Area Rock Camp for 3 years and I loved the empowerment of that program, but I wasn’t a musician and I wanted to create something that would help get more women involved in the field I loved, media.

My colleague, Zoe Boxer, and I started planning the camp the winter of 2013. We just wanted to create an environment where girls could learn from media professionals and work on their creative, technical, teamwork and leadership skills. It was also incredibly important to me that the campers used technology that was used everyday so they could leave camp and feel they could pick up their phone or camera and keep creating and telling stories.

Why do you think it’s important something like Camp Reel exists?

Where do I start?? At the moment less than 20% of main decision making positions in the media are held by women and that has a big impact on how women and girls are being represented  on screen.

Study after study show that these numbers are staying the same or getting worse for some careers in the media, but we can change that.

All I want to do is create a program where young women can practice those skills and get good advice from from people who have experience working in the media. This year we saw that films with female characters can break box office records, so hopefully studios will start to create media we can all enjoy, but I don’t want to wait for that.

That’s why we have our own film festival after each camp, so the campers can share their work with their friends, family and community. Then we continue to enter their films in to film festivals and we have had several films from our first year accepted into other film festivals.

I love tv and movie and I am bored with the lack of creativity in what’s out there at the moment. I want our campers and young women of the world to create a much more diverse media, so there is more for us all to enjoy, learn from and watch.

What kind of work do the participants create?

You can see last years films here – and remember, these were all created in FIVE days!

We hear you have some exciting tutors lined up for this year – can you tell us a little about them?

We have volunteers from Pixar, ILM, Dreamworks and many other places. Last year we had participants such as Academy Award winning director, Brenda Chapman, Dreamworks director, Jill Culton, Pixar Story Supervisor, Nathan Stanton, Feature Film Editor Sheila McIntosh and many others!

You can read about all our volunteers from last year here  Hopefully most of them will be back this year and we will have many others.  You can always follow us on our Facebook group Camp Reel Stories and we will highlight our guest instructors there as we get closer to camp.

You’re based in Oakland, California – can you tell us a little about what life is like in your part of the world?

Oakland is a really amazing place. It is diverse city with both an urban heartbeat and natural beauty. With in 15 minutes you can go from getting a specialty coffee at a hip, locally owned coffee house to hiking in the Oakland hills. It has new arts fairs, restaurants and neighbourhoods blossoming. We are so close to San Fransisco, you can get there via our underground system called BART so that’s a great as well.

At the same time Oakland has some serious challenges, as we have neighbours and neighbourhoods that are financially struggling and the diversity that makes Oakland so fantastic can also be a challenge for some cultures to feel equally represented.

That’s one reason I am so excited about have Camp Reel Stories here. Our campers all have such different backgrounds and their own interesting journeys and stories to tell. It’s the thing I love the most about camp is watching a team, or production company as we call them, of five different girls with completely different backgrounds come together and find a common story to create.