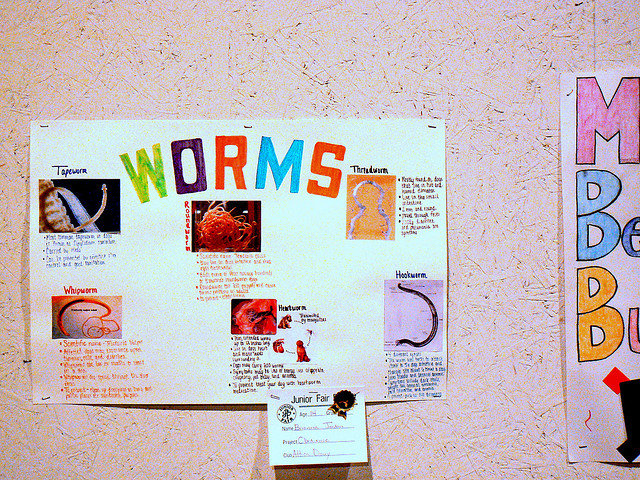 In the second of a series of articles on health, pharmacist and writer Asha Fowells looks at threadworms. This may make you go ‘euuuuuw’, but it is an important thing to know about, because while threadworms are icky, they are reasonably easy to treat.

The term “parasitic infection” may make you think of intrepid explorers in rainforests and jungles, but there is one parasite that lurks much closer to home: threadworm.

Threadworms – sometimes called pinworms – are 2-13mm in length and white in colour. Put them on a dark background and they look like tiny white threads, hence their name. They get into the human body by being swallowed as eggs. These hatch in the small intestine, live there for a few weeks, then travel to the large intestine where they live as adults. The exception to this is the female, which – as it comes to the end of its six week lifecycle – travels to the anus (usually at night time) to lay its eggs.

The hands and nails of the person who has the threadworms living inside them (known as the host) pick up the eggs when they wipe their bottom after going to the toilet or scratch it. There is then a fair chance that the person will touch their mouth with their hand and take in the eggs, restarting the cycle once more

How do I know if I have threadworm?

Often there are no symptoms, and a sufferer may only realise they have a problem because they see the worms on the skin around their anus or on toilet tissue after wiping, usually at night. If symptoms do occur, itching around the anus is the most common, and again this is worst at night.

If the threadworms have been present for a long time, the person may lose their appetite and sometimes some weight. They find it difficult to sleep at night and may be grumpy during the day due to tiredness. Someone who thinks they have threadworm but have seen no actual worms can do a simple test involving pressing a small piece of transparent adhesive tape (such as Sellotape) to the skin around the anus first thing in the morning before washing or going to the toilet.

When the tape is removed, tiny worms may be visible. The sample can also be taken to a doctor’s surgery for analysis under a microscope as this will allow any eggs (which are too small to be seen by the naked eye) to be seen.

What do I do if I have threadworm?

If anyone in a household is found to have threadworm, everyone in the household must be treated. Anyone aged over six months (except pregnant and breastfeeding women) can take a single dose of mebendazole, which kills the worms. If the infestation continues, a second dose should be taken two weeks later. Mebendazole is available to buy from pharmacies, in tablet or liquid form.

Hygiene measures make all the difference in preventing the condition spreading or recurring. On the day of treatment, all sleep wear, bedding, towels and cuddly toys that have recently been used should be washed (a normal cycle on the washing machine is fine) and rinsed well. The whole house, particularly the bathroom and bedrooms, should be thoroughly damp dusted and vacuumed.

Eggs can survive for two weeks outside the body so it is important to take care with this step. For two weeks immediately after taking the medication, close fitting underwear should be worn every night and changed each morning. Everyone in the household should wash or shower immediately upon getting up in the morning, paying particular attention to the area around the anus.

If night time scratching is a problem, wearing gloves at night can help, but these must be washed every day. Hands should be washed thoroughly, including scrubbing under the nails, first thing in the morning, after going to the toilet or changing nappies, and before and after preparing or eating food. Nail biting, and thumb and finger sucking should be discouraged, and towels and cuddly toys should not be shared.

Mebendazole kills the worms but not the eggs, which is why the cleaning and washing steps described above are so important.

Can I go to school?

Despite the fact that threadworm is more common in children than adults, because of the close contact children have at school (and often poor personal hygiene), threadworm is not a reason to stay off school. Sorry about that. However, following good hygiene measures such as frequent handwashing and keeping toys and equipment clean can stop the spread in the first place.

Are there any other ways I can catch threadworm?

Occasionally, threadworm can be caught by swallowing eggs that have become airborne. An example of when this might happen is when changing the bedsheets of someone who has threadworm. Threadworm can be caught from domestic animals, such as dogs and cats, but this is because the eggs might transfer onto their fur from the hands of someone who has them and then onto another person, rather than because the animals have threadworm themselves.     Featured Image