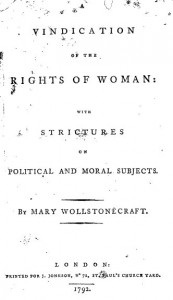 Mary Wollstonecraft was born on 27th September 1759 in Spitalfields, London.  Her family were very rich at first, but her father Edward John Wollstonecroft was not a good business man.  This meant the family moved a lot and eventually they became very poor when he lost all the family money through bad business decisions.  Mr Wollstonecraft was a bully and could be violent to his wife Elizabeth (neé Dixon).  Unfortunately at that time there was no way for a woman to leave a violent husband.  Mr Wollstonecraft also lost all the money that Mary should have inherited when he forced her to give it to him.

Mary had been to school where she learned the Classics (Greek, Latin, History) and theology (the study of Christianity).  She made two very good friends, Jane Arden and Fanny Blood, whose families were kind and supportive.  They were very clever and helped Mary to learn about philosophy, science and politics.  Mary’s family situation meant marriage was unlikely so she had to take a job as a Lady’s Companion when she was 19.  A Lady’s Companion was someone who was paid to travel with a rich woman in order to make sure she wasn’t travelling alone and to provide friendship.

Her mother became ill so Mary returned home to nurse her until she died in 1781.  Mary then set up a school with Fanny Blood but this ended in 1785.  Fanny died a year later in the house they were sharing in France.  Mary became a governess but she was outspoken and after disagreements with her employer she was fired in 1787.  She had had an article published called “Thoughts on the Education of Daughters”, in which she argued that girls should be taught the same as boys.  Her publisher gave her a job as an Editor, Reviewer, Adviser and Translator for the new magazine “Analytical Review”.  It was in this job she became a well-known and respected writer. 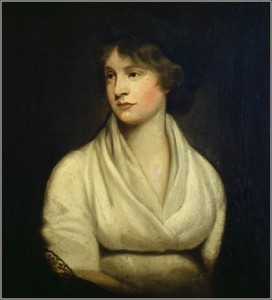 Mary met Captain Gilbert Imlay when she was living in Paris and they had daughter she called Fanny in memory of her friend in 1794.  Captain Imlay left her in 1795 as she was staying alone in Sweden for four months.  She became ill with depression through this, even attempting to kill herself.  She recovered and wrote a book called “Letters from Sweden” describing her feelings and her path to health which she partly blamed on the strict rules women had to follow.

In 1795 Mary started a relationship with William Godwin.  She fell pregnant with her daughter Mary, who would marry poet Percy Bysshe Shelley and write the famous novel “Frankenstein”.  Mary and William got married, although they continued to live apart, and they were very happy.   Mary began work on “Maria, or The Wrongs of Women” which talked about women’s rights and love lives.

Sadly Mary suffered from an attack of septicaemia (blood poisoning) after her daughter was born because healthcare was not as advanced as it is now.  She died on 10th September 1797 with the novel without finishing the book.  It was later published unfinished by Godwin, who greatly admired his wife’s works and was a good support to her.   Mary believed in equality between the genders.  She was criticised by her peers because her personal life was not the way women were supposed to live.  Her work became very famous after her death and she has been a hero for many women and men since then.

Tina Price-Johnson is a Paralegal and Litigation Assistant by day, and Freelance Writer/Poet by night and weekend.  She loves history and biography, and enjoys writing about almost anything.  She lives in London and travels in the UK and abroad whenever she can, and can usually be found wandering around crumbling ruins, wherever they may be

The Grafitti art above appeared in Newington Green, London of March this year. Mary  attended church here and also opened up a boarding school in the area.   A charity called Newington Green Action Group are hoping to raise enough money to build a statue of her in the area by fund-raising and selling prints of the grafitti. To find out more about Mary, and the project to build a statue of her click here